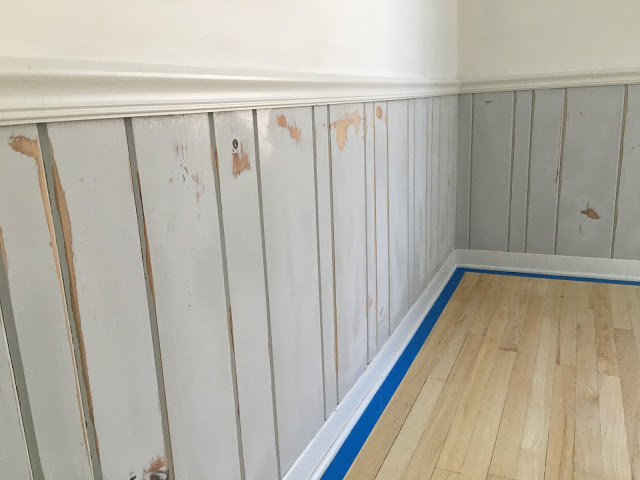 I figured it was time for an update on our little office / back room project, but prepare yourself for the most unexciting update ever.

Last I mentioned it, the drywall was up and the ceilings were painted and ready to be installed. That was ages ago. At least it seems like it. I think it was about two weeks ago. Since then, the ceiling and crown molding went up (they did a great job on that) and I got to painting.

The wainscoting in that room suffers from the same problem as the rest of the paneling in the house: it was painted over shiny poly, shellac or varnish without being sanded or primed. That means it’s a pain to paint it if you want to do it right.

I opted for doing it mostly right and gave it all a really good sanding, but I didn’t necessarily get all the way down to wood. After that I cleaned it and caulked all the gaps, which are plentiful in that old paneling. Then I primed with the same Zinnser BIN primer I used on the ceiling planks, and following up with Benjamin Moore Aura in satin. I used Mascarpone, which is the white we have in most of the house. Even though I gave it two coats, it’s looking a little thin in some areas so I think I’ll need to do a third coat.

Before the ceilings, crown and trim were installed, we painted the walls (it’s so much faster when you don’t have to cut in around the ceiling or door trim). I’ll be honest, when I asked you all for your opinion on what color I should paint that room, I was leaning heavily toward something in the aqua family. But the the voters were very much in favor of a navy-ish color and a few people commented or wrote me practically begging me not to do the aqua. Well, you guys swayed me. 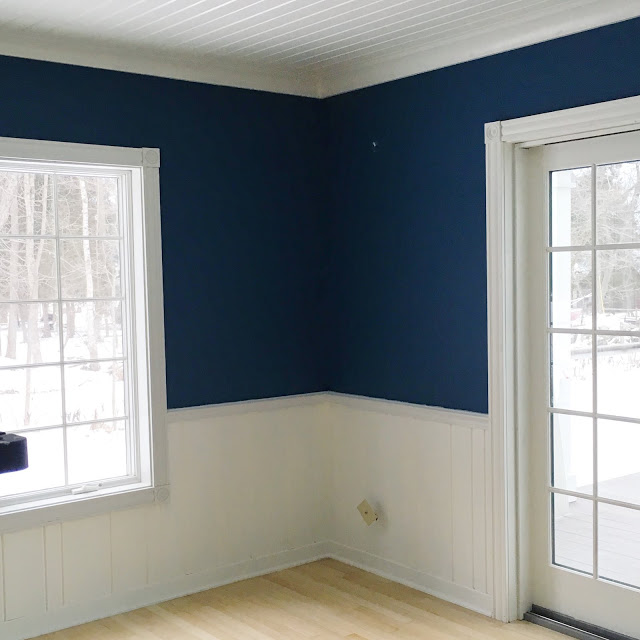 We ended up going with BM Summer Nights, which is a deep navy that leans toward teal in some lights. I liked the idea of a very tealish-navy as that picks up a color from the Chaing mai dragon fabric on the chairs. I’ll also be completely honest and admit that the name of the color helped convince me to go that dark. I hate to say it, but I am absolutely influenced by paint color names. It’s probably not at all good design, but it’s the way my brain works.

We were able to crank out two coats of wall paint (I favor matte paint for walls) quickly and it looked great until they came to install the ceilings and put a bunch of dings in it that I had to go back and patch. I still haven’t fixed the paint and I think I’ll probably end up just doing an entire third coat so I don’t have noticeable touchup areas.

I’ve filled all the holes in the trim, but I still need to paint it all, plus the two closet doors. I was on such a roll with painting and things were going so great but somewhere along the line I lost steam and I’m having a really hard time getting going again. Now it’s to the point where I just need to crank it out. It doesn’t help that we have no light in that room right now so if I work at night it’s by shop light.

The sad fact about this project is that it was supposed to be done two weeks ago. A few things took a little longer than they should. The contractor left for a week for another project, putting a pause on the whole thing. But the big hangup has been the floors. I talked a little about this on Facebook, but allow me to bring you up to speed.

When they were finished with the drywall but hadn’t yet done the ceilings or trim, the room was in a horrible state. It was absolutely covered in dust and dirt and there were holes in the floor covering they had put down to protect the wood floors. Drywall compound was everywhere (I was not impressed with the drywaller who was really, really messy; others I’ve worked with in the past have always worked very “clean”), including caked on our floors through the holes. We spent an entire day ripping up the red rosin paper they put down and cleaning up. In fact we blew up our shop vac and had to get another one. Then we had to scrape all of that drywall compound off. And when we lifted the paper (I wanted to clean the floor and get new paper down for painting and to make sure we weren’t grinding a bunch of dirt in), we discovered that the dye in the red rosin paper had stained the floors in the area where the paper had gotten wet.

Our beautiful light floors (which were actually in great shape in that underused room, save for a bit of sunfade around the area rug) looked like a kid had gone to town with a pink highlighter. I’ll spare you the details of dealing with this, but basically the contractor had never heard of this (I’ve since found out this is fairly common knowledge that red rosin paper absolutely cannot get wet), half accused us of doing something wrong and then agreed that it was his responsibility after we all met with the flooring guy, he filed an insurance claim, I had to deal with his insurance company and now it all seems to be handled and we’ll be reimbursed the cost of refinishing the floor in that room.

The result was fine but in the meantime it has completely taken the wind out of my sails for this project. Everything was put on hold while we waited for a resolution on the floors and I used that and an excuse for my painting procrastination.

So that’s where it is. Totally not finished. But here’s a peek of a little something that’s going in that room. 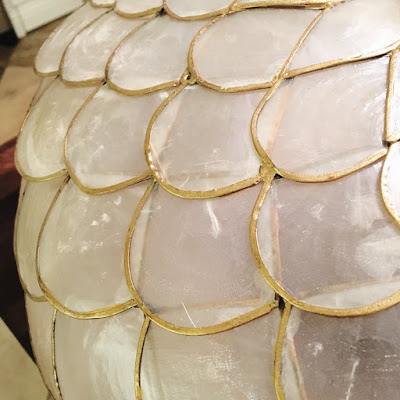 In other news, we’ve had to add an interesting detail to our stairs. What do you think? 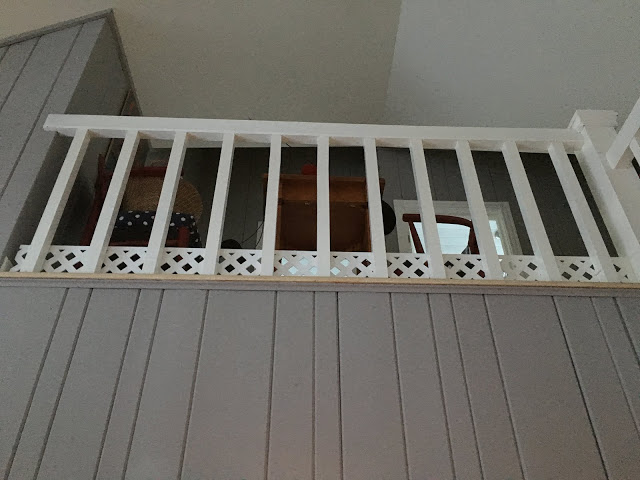 In case you can’t quite tell, that’s plastic lattice zip-tied to the balusters. It’s not there because it’s stylish, that’s for sure. Our geriatric cat Desdemona seems to be completely blind now and a couple weeks ago she walked between two balusters right off the edge of the second floor. She was OK (she’s taken the same fall at least three other times that we know of), but we didn’t want it to happen again, so scoured Home Depot for a quick solution and came up with an expensive sheet of vinyl lattice. We just cut it to the length and width we needed and used a handful of zip ties to hold it on. So far it’s working great and poor Desi’s biggest issue has been accidentally stepping in her food dish.

Like I said … it’s an unexciting update, but now you’re filled in.

back room office renovation
by Erin @ The Impatient Gardener
4 Comments
previous post: SOMETHING DIFFERENT IN SEEDS
next post: FRIDAY FINDS … on SUNDAY