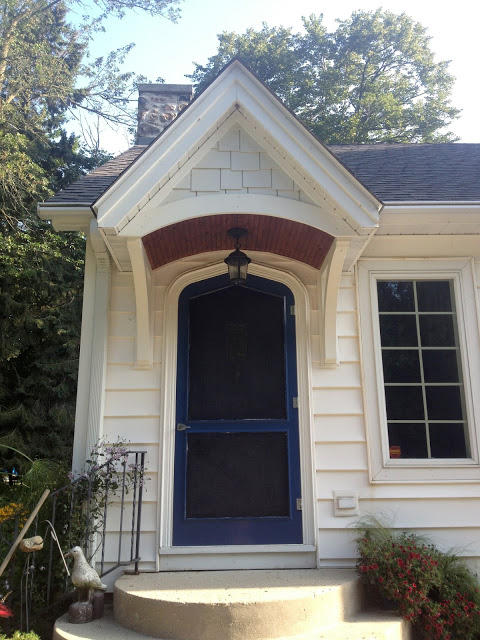 It’s not unusual for me to let house projects slide during summer. After all, there is gardening to be done and fun to be had. And winter up here is way too long so it’s good to have some things to keep busy with. But this summer, more than any other, I pretty much walked out of the house, leaving paint brushes in my wake, and never looked back.

At least until a week ago or so.

I read a blog not too long ago (I’m sorry, I don’t remember which one) where the author was lamenting the fact that one project took her so long to complete that she actually grew and birthed a baby in between when she started it and when she finished it. Well, in the case of the project I finished up last week, I could have grown and birthed an elephant. Theoretically speaking, of course.

And the stupid thing about is that it wasn’t hard. It was just a matter of finding the time to do it. Twice.

Allow me to explain. Remember when I painted the front door a different color of blue? Ironically I even mention in that post that I had to repaint the screen door that winter (this is all two years ago, if you’re keeping track). And I did. I had decided I wanted to pain the inside of the door white to match the trim in the living room (where the door opens to) and blue on the outside to match the outside of the door.

So I painted one side white and one side blue. And that was all fine and dandy until I went to put it up and I realized I had put the colors on the wrong sides. How that happened, I have no idea, except I think maybe I was thinking the hinges were on the other side or something. Anyway, I was so disgusted with myself that I set the screen door aside for another time.

But that time didn’t come until a week ago or so. We actually went all the way through last summer with no screen door on the front door. It was hot last year though, so we probably had the air conditioning on most of the time and it didn’t matter much. Or so I tell myself now.

Anyway, this summer I pulled that thing out and resolved to just finish it the heck up. And it was a pain to paint over that dark blue paint. Oh well, that’s the price you pay for being stupid.

So last weekend, one week before Labor Day (so, what some people consider to be the end of summer but I refuse to buy into that theory), I hung the screen door. And we’ve been enjoying the breeze through it almost all the time. I can’t believe we lived without it for so long.

Speaking of house projects, I find it amazing that even though I don’t have kids, so nothing really changes in my life after Labor Day, and the weather is still summerlike, I feel like I can already feel myself shifting into “indoor” mode. This morning I was pouring a cup of coffee and out of the blue I decided that maybe we should put gray grasscloth on the walls in the kitchen. Where did that come from? Seriously I haven’t given an iota of thought to anything in the house for more than three months and suddenly I’m thinking about wallpaper. Insane.

Do you do that? I suppose I better start making a list of projects so I don’t go off half cocked and start something I don’t need to be doing. Perhaps I could start with last year’s unfinished list.