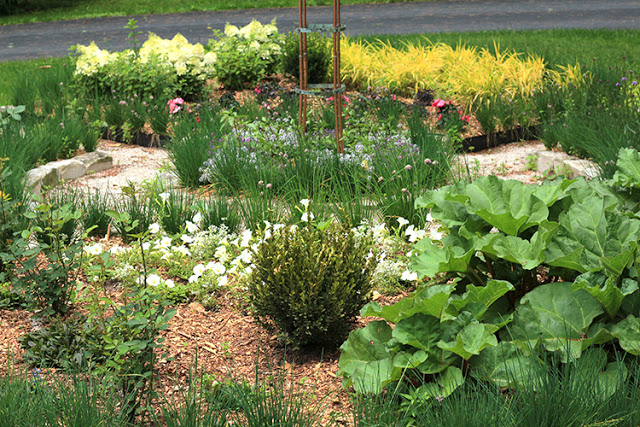 It’s been a while since I updated you on the progress of the circle garden, but it’s really coming along.

The brief history of this garden, which sits right by the front door, is that it was a weedy patch of dirt with a few perennials in it when we bought the house. I resurrected it as an oval garden divided into three segments, separated by curvy paths. It was a design that didn’t work—I see that now—but for a brief time it wasn’t terrible. Until it was. It needed a complete revamp and last fall I ripped it up and started from scratch.

I’ve gone more formal with the design, although it has a bit of an odd twist to it. There are four outer quadrants and a center circle, each delineated with a chive “hedge”, and each outer quandrant is divided into three sections with a boxwood in the center.

I chose the plants with an aim to get lots of color spread throughout the garden, a ton of texture and a foliage element in each area. There is a combination of shrubs, perennials and annuals, so some plants will take a few years to really come into their own.

It’s still early days for everything and I hope the annuals will fill in their areas appropriately, although I did have to go back and plant some purple sweet potato vine between the Impatiens as that area was definitely looking too sparse. 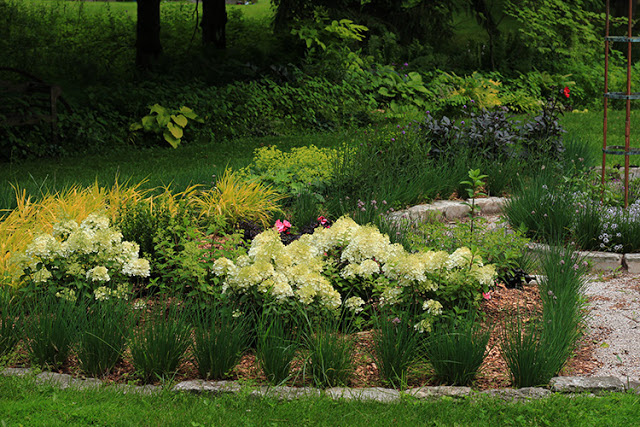 The final step in this project is to fill in the paths with a decorative gray gravel. Right now the paths are just a limestone road base that I laid down in fall. I didn’t want to put the gravel in until I was finished planting as the longer I can keep soil out of the gravel, the longer I’ll be weed free there.

I made a video about the process. Check it out here.