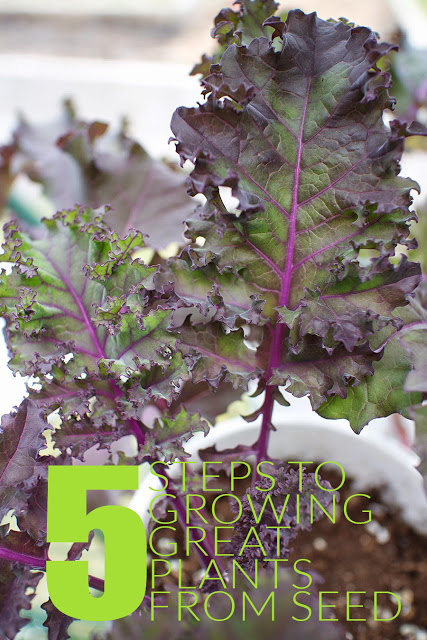 My neighbors must be understanding people. Until about midnight every night a bright white light emanates from the sliding glass door in the office, illuminating our back/side yard and, I’m assuming, that side of my neighbors’ house. Fortunately their bedrooms don’t face this direction, but it’s bright.Of course by this time they know the drill at this time of year. The lights are part of package when you live next to a semi-crazy gardener. Free plants and garden advice go a long way to make up for what happens during seed-starting season.

If you’re into seed starting, you probably have some going by now. And if you don’t, it’s not too late to start. I’m of the opinion that, especially in northern areas with shorter growing seasons, starting most seeds indoors later that you probably should have is still better than direct sowing them later (the qualifier is there because some seeds just do better being directly sown or germinate and grow so quickly that there’s not much benefit to starting ahead of time).

So you’ve sown some seeds, the next step is taking care of them. Here are some tips.

Caring for seeds that are waiting to germinate or just starting out pretty much comes down to these three things. For light, I’m going to be honest: In almost every case, you’re going to need supplemental light. Keep it close—within inches—and on for about 18 hours a day. I don’t have nearly enough light to grow all the plants I start, so I give them a good start under the lights and then move them to the sunniest location I have to make room for more seeds needing a good start. If they start getting spindly, I’ll pop them back under the lights on a rotating basis.

As for heat, that mostly applies to germinating seeds, so once you have sprouts, it’s not as important. I feel like it’s better to leave seeds on heat until about three-quarters of them have germinated, although keep in mind that most lights will produce a fair amount of heat as well.

When it comes to moisture, you want moist growing medium for seeds. In general, I think the dampness of a rung-out sponge is a good guide for what you want. I also think that watering from below by soaking a seed tray, is preferable than watering from above. If you have to water from above, use a spray bottle on the misting function. I have been using soil blocks for a lot of things and I will just fill the bottom of a tray with about a quarter inch of water and the soil blocks just suck it up. Be aware that seed trays that aren’t covered will need water much more frequently than those that are covered.

2. PET YOUR SEEDLINGS
I do this naturally because I’m an unabashed plant toucher (plant touching exploits here, here and here) , but it turns out it’s good to fondle your seedlings a little bit. Mechanical stress, as they call it, can help trigger an immune response that can help ward off disease. And you get to pet your plants.

I think this is one of the most important things you can do to create great plants. You want to create bushy plants, not spindly skinny ones, and pinching the back is the way to do this. When seedlings have about three or four true sets of leaves (this doesn’t count the first seed leaves that appear), pinch back to above the second set of leaves. As plants grow you can keep pinching back but obviously to other locations as the goal is to encourage branching. I know it’s hard to just cut off what you’ve worked so hard to grow, but it really is key to the whole operation.

4. KEEP AN EYE ON THE ROOTS

Unless you start seeds in large pots, which only works for some things like sweet peas and beans, you’ll probably need or want to repot seedlings at least once into larger pots. Keep an eye on the root growth of seedlings; when you start seeing roots pop up around the sides it’s time to repot. Soil blocks allow roots to “air prune” to a certain extent, which is helpful, but if you plant in little modules, you want to make sure to pot on before they start going in circles. It’s not good to go up in size by a lot when you repot, so I usually go to a three- or four-inch pot. Use a regular potting mix at this point, but not one with fertilizer in it as seedlings are still susesptible to burning. And watch the watering, because it’s easy to overwater a seedling after repotting.
5. HARDEN THEM OFF

All of the hard work and effort you’ve put into raising healthy little plants can be erased in one night if you don’t properly harden them off. Hardening off plants is the process of gradually getting them used to being outside before they are planted in the garden. Temperature is a factor, but sun is even harder for plants to get used to. You can harden off plants anywhere, just start in a shady spot for a few days and then bring them in at night. Gradually work them into more sun. Garden fabric (I’ve always called it row cover, but maybe that’s not right) is also very helpful to keep plants shaded during hardening off.

I used to load up a wagon with seed trays and pull it around the yard to adjust for the sun when I was hardening off plants. At night I’d just pull it into the garage to protect plants from low night temperatures and browsing creatures of the night. These days I use a temporary greenhouse to harden everything off.

I like to give the hardening off process an absolute minimum of a week, but usually more like two or even three weeks.