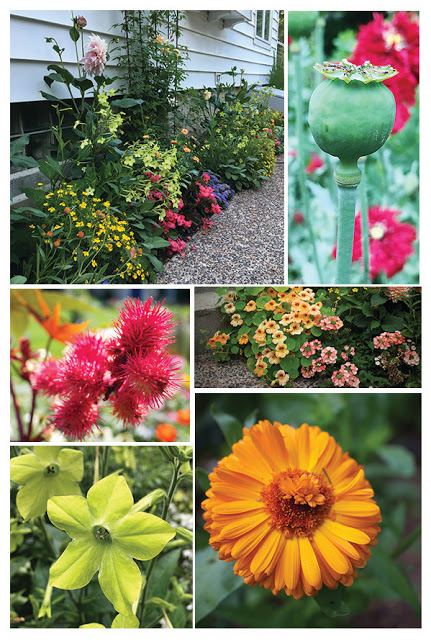 Here are five of my favorite super simple flowers to grow from seed. And when you see how much these plants cost at the nursery you’ll wonder why you weren’t doing it sooner.

Are you sick of me blabbing on about nasturtiums yet? I’m sorry, but I really can’t say enough about them. To review: They are beautiful, edible (both leaves and flowers), may help fend off “bad” insects and, most importantly, are easy as pie to grow.

The seeds are quite large, usually bigger than a pea, which makes them easy to handle and easy to plant. They have a hard seed coat, so it’s a good idea to soak them first. I used to soak them overnight, but then I switched to a shorter soak of two to three hours in hot water (changing the water a couple times to keep the temp up) at about 85 or 90 degrees. I haven’t noticed a bit difference, but I’ve forgotten seeds before while soaking and that definitely isn’t good.

I usually start them with three seeds in a 4-inch pot but I’ve also grown them in soil blocks. They are equally easy to direct sow in the garden. I’ll start several kinds early inside but then I go back later and fill in empty holes in the garden by popping in a few seeds.

Start them about four weeks before your last frost date, planting them about a half-inch deep and keep them cool. You can plant them out after the danger of frost has passed. In my area they grow equally well in full sun to relatively shady conditions, but hotter areas may requite a touch of protection from full sun. The key to success with nasturtiums is to not plant them in soil that is too rich or fertilize them. If your nasturtium is growing lots of leaves and no flowers, it’s because you’re treating it too well.

I can only speak to the simplicity of growing some poppies, as there are many varieties, but most truly couldn’t be any easier and, as a benefit, they are the single easiest seed to save so you’ll have as many as you need forever.

Here are the super simple directions for planting them: Throw the seeds on the snow or soil where you want them in February. I’m not kidding. That’s zone 5b so you may need to adjust the timing a little, but don’t sweat it. You can actually plant them by raking them in to a prepared bed, but try not to get later than a month or so before your last frost. They need light to germinate, so don’t cover them. Plant them in full sun.

When they are finished flowering, which isn’t a particularly long time, their seed pods provide just as much interest, if not more, than the blossoms. Let them stand but later in summer cut all but a few otherwise you’ll have poppies everywhere (they will readily reseed themselves). In early fall, give the seed pods you left standing a little shake. If they rattle, the seed is ready to harvest. Simply cut off the seed head, keeping it upright and just pour hundreds of seeds into a bag.

I’ve grown something very similar to this in the past but this year I’m adding Iceland poppies that I think I’ll start indoors just to be safe.

Also known as pot marigolds, calendula has all sorts of edible and medicinal purposes, but it’s worth growing if you do nothing other than enjoy looking at it. The flat seeds are large enough to be handled easily and starting them is simple stuff.

I start them in soil blocks but small pots or cells would work fine too. Plant them about 1/4 to 1/2-inch deep as they need darkness to germinate. I put them on a seed-starting heat mat at 70 degrees. Every time I’ve grown them I’ve had about 99% germination. You can certainly start them outside as well by direct sowing. I start them about eight weeks before my last frost date and they can be planted out a couple weeks before the last frost, although I don’t recall ever doing that, only because I like to plant all my annuals at the same time and so many can’t be planted out early.

They come in traditional marigold colors and some shades of pink. My favorite is a bright, neon orange call ‘Geisha Girl.’

I’ve been growing Nicotiana alata ‘Lime Green’ for a few years and it is a favorite. Although some Nicotianas can be extremely fussy (I once tried to grow Huichol Nicotiana even though the company I ordered from warned me it was difficult to start and sure enough, nada), this one and many others are no problem. In fact the hardest part about planting them is that the seeds are even smaller than poppy seeds so it’s very difficult to not oversow.

They need light to germinate, so don’t cover them, just gently press them down so they have contact with the soil. I also put them on the heat mat. Then be careful to only water from the bottom or use a mister until they germinate so you don’t wash them away. Start them about eight weeks before the last frost, potting them up as necessary. They can be planted outside after the danger of frost has passed. 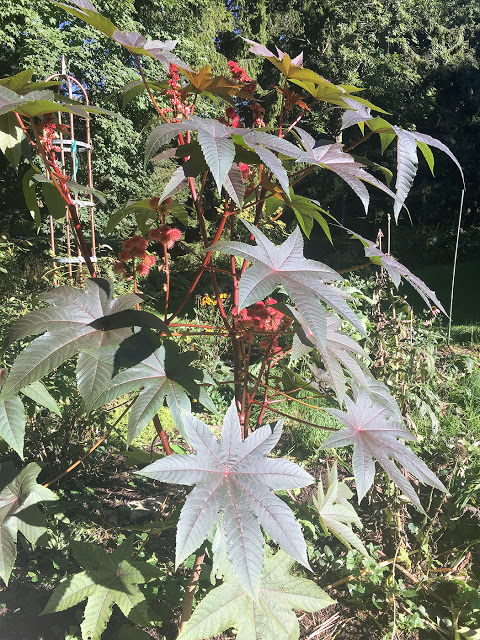 I may be pushing the “flower” definition here a bit because castor beans are generally grown for their foliage but they do have beautiful, if a bit strange, flowers.

What kid hasn’t been handed a cup full of dirt and a dried bean and been told to plant it as a grade-schooler? Kids are filled with pride as the bean quickly sprouts and grows to a size large enough to take it home and present it to their parents. Teachers pick beans because they are pretty much guaranteed to grow and the same holds true for castor beans.

I start them in 4-inch pots about six weeks before the last frost, planting them one per pot, about 1¼ inches deep. I give them some bottom heat to get them started on the seed mat. Once they germinate and start growing you have to be careful about giving them even light or rotate them at least once a day as the plants can take off in one direction seeking sunlight and never really straighten out.

The key to castor beans is to make sure not to plant them out too early. They will not handle anything below 60 degrees, at least as young plants and will sulk at best and die at worst if they get colder.

It’s important to note that all parts of castor beans are very poisonous, so some care must be taken in where you plant them. And although I love the spikey, bright red flowers, I don’t bring them inside because I don’t trust the cat to leave them alone.

I’ve grown ‘Impala’ and ‘Gibsonii’ and wouldn’t be able to pick a favorite. ‘Impala’ is a “dwarf” variety, meaning it stays about 5 feet tall or less but ‘Gibsonii’ has spectacular flowers and has more of a tendency to flop later in the year, especially if they get dry.

There are many other flowers that grow very easily from seed but I’ve either never grown them (or not grown them for several years and have therefore forgotten their habits) or for whatever reason I personally haven’t found them to be as easy as other people have so I left them off the main list. Still, they are worth checking out:

What are your favorite flowers to start from seed?