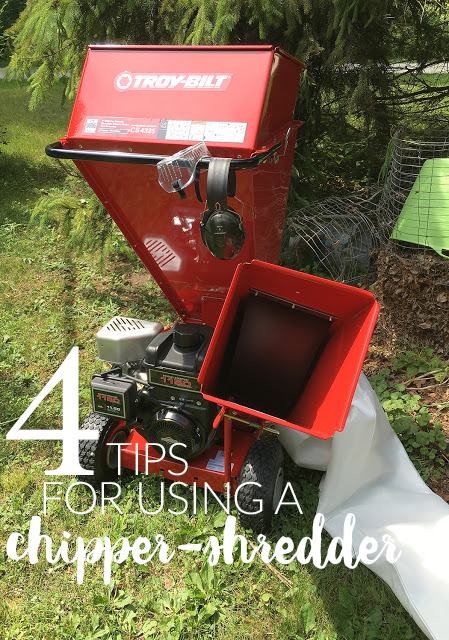 I spent many, many hours dealing with leaves last weekend. I say “dealing with” because removing the leaves from the lawn and getting them to their final resting place involves a series of machines and every once in awhile an actual human-powered rake.

My method mostly involves using our lawn tractor to mulch and bag the leaves on the lawn and then to run them over to the chipper-shredder, run them through that, then add them to the compost bin.

A quick break for a disclaimer: Both the lawn tractor and chipper-shredder I have came from Troy-Bilt and were given to me to test as part of my work for them as part of their Saturday6 blogging team. (You can read my reviews of them here and here.)  Of course I’ve not been told what to say and all opinions are my own. I was not asked to write this post, but since I’m using Troy-Bilt tools in it, I wanted to give you the full spiel.

Because there were a lot of leaves down, it didn’t take me long to suck up two bags full with the mower bagger. So I fired up the chipper-shredder about every 10 minutes. Repeatedly.

Which means that I have a whole new slew of tips about using a chipper-shredder. The one I have is the largest and most powerful model that Troy-Bilt makes, but it’s still a homeowners’ version, as will most chipper-shredders that people use at their homes will be. The point is, don’t expect these machines to do what professional model chipper-shredders, like you see arborists and city street crews using, do.

Here are a few tips I picked up from lots of firsthand experience over the course of the summer and particularly into fall.

Chipper-shredders have a ton of safety features built into them, which is good, particularly if you’ve ever seen the movie “Fargo.” Pretty much the only ways you can get yourself in trouble are sticking your hands into the machine (which is not easy to do) or not wearing eye protection in case something comes flying out of it (which I’ve not experienced but I don’t take chances with my eyes).

But one sure way to block the whole program up is to try to put too much through it at one time. If you put too many leaves in the hopper at one point, nothing gets sucked through, so in order to clear it you either have to turn the machine off, pull everything out and start over or start poking around with a large stick. Yes, I did that. Yes, I realize you should absolutely NEVER EVER do that. But the first method for clearing is a big drag.

Better you just avoid any of it by putting in small amounts of material at one time. This meant that instead of just dumping the entire collection bag from the mower into the hopper, I would gradually pour it out. This took a little more time but it was much faster than constantly stopping to clear the clog.

I started working on my leaf collection project first thing in the morning when the leaves were still  covered in dew so they were pretty wet. What I found was the damper the material I was putting in was, the more likely the machine was to clog and the smaller the amount I put in at one time needed to be. Once I figured it this out things went smoothly, but upon further review, I think I would have saved a lot of time if I had just waited for the sun to dry everything off before I started putting stuff through the shredder.

The same goes for other garden waste. I also put through most of what I cut out of the garden. This was harder as stems and other plant material didn’t drop to the bottom of the hopper as easily as leaves, but I got around that by doing some strategic loading. Small bundles at a time were needed.

My chipper-shredder can grind up branches up to 3 inches in diameter and it does a great job with it. In fact, I wish I had more branches to put through it because it makes the best mulch I’ve ever seen. But when they say 3 inches, they mean 3 inches. I put a branch that was probably only 1.5 to 2 inches in diameter in it and it ate it all up, until it got to a big knot, or maybe where it had attached to another branch, which was bigger than 3 inches and it stopped it up good. This, of course, meant  stopping the whole thing, making very sure that all the parts were finished spinning, and then going in there to pull it out, which was not easy.

I suppose that there are different kinds of collection systems for different chipper-shredders. But on the one I have, there is a long bag that attaches to the chute. I quickly found out that it’s crucial that the bag is laying flat on the ground, not twisted. When you start up the machine it’s obvious when all is right because the bag will inflate.

I would estimate that shredding the leaves I collected about doubled the time I spent on that project last weekend. That’s not an insignificant amount of time. But what I ended up with was lovely, tiny bits of leaves that will break down very quickly and all fit in my compost bin. I’ve always saved leaves, but before I shredded them, I would just keep them in piles by the compost bin, allowing some to break down by themselves for leaf mould and I’d add the rest to the compost as needed. In either case, the decomposition process took a long time.

My hope is that with everything so nicely shredded, I’ll have a lot of finished compost to use by late spring or early summer. If that is the case, the extra work will have been well worth it.

There are more leaves still to fall, of course, and even though the compost bin is getting pretty full (I’ve been dutifully layering it with greens as well), I have plans for the rest of the shredded leaves I’ll produce. More and more I’ve been reading about the importance of fall mulching of garden beds, and finely shredded leaves are a perfect material for that. They will certainly be put to good use there. I also like to heavily mulch the roots of some of the less hardy plants I grow, so shredded leaves (which won’t blow away) will be great for that too.

Because this is my first year shredding leaves (although we’ve mulched them with the mower for a few), I won’t really know if the extra step was worth it until next year, but I have to think it is.