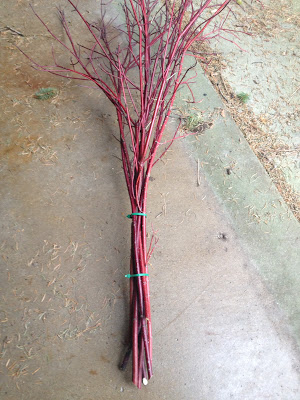 Gosh, here I was reveling in the extra-week-in-between-Christmas-and-Thanksgiving glow and all of a sudden it’s December and I’m freaking out a little bit. Every year I resolve to take time to actually enjoy the holiday season instead of scurrying around doing everything, and every year, I end up totally stressing myself out.

The problem is that I’m just not the kind of person who can do things far ahead of time. I like Christmas shopping near Christmas, and I hate thinking about winter and Christmas in the middle of summer, so I’ll never be that person who sees the perfect gift in July and actually buys it. The same goes for interior holiday decorating. I can’t live with all those decorations for that long, but then I end up decorating when I feel like I should be “enjoying.”

This is just the kind of person I am, I guess.

My favorite decorations are the ones I do outdoors. It’s my little shot of gardening after a few months off (from the fun stuff at least; cleaning up the garden for winter does not count as fun). I spent most of the weekend working on four containers (three at home, one at work), with frequent stops for various other activities including helping decorate our work entry for the local parade (and handing out candy at said parade later), beach walks, Christmas card photography (third and final attempt), making beef stew and what must have been a lot of other stuff but I can’t really remember.

As I showed you last week, I got my red twig dogwood from the field by my parents’ house and as it turns out, I didn’t cut enough again. Every year I think I have more than I could possibly need and I always seem to come up short. I’ve found that I prefer them bunched together in pots rather than scattered about so I bundled them together with green wire ties. For the larger pots I bound a stake in the middle that I can plunge deep into the pot for stability. I learned this trick from Deborah Silver, queen of the Christmas container. 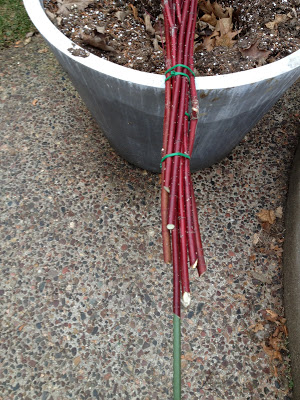 The urn in the middle of the garden (purchased last year to hold the Christmas tree) has a plastic pot that sits in it as a liner so I don’t have to fill the entire urn up with dirt when I plant it. In that pot I just drilled a hole through the center and stuck the stake straight through the pot. Since I had already removed the soil from it, I just fill it up with a small amount of mulch followed by beach sand to hold everything in there. Everything else I just stick straight into the soil left from the summer planting and wait for Old Man Winter to freeze everything up nice and tight (which has yet to happen again this year). 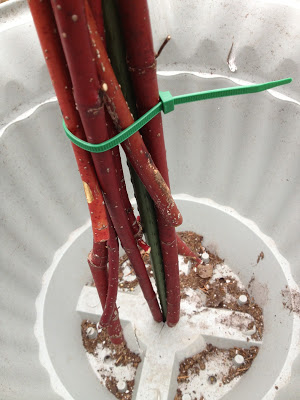 After I stick the dogwood in, I fill in with evergreen boughs. Although our property is covered with evergreens, they are mostly some kind of spruce that has a weeping nature to it, which doesn’t make for the perky containers I wanted this year. I went to Home Depot where I found that that some of them will let you take the cuttings from the trees they sell, except someone beat me to it. I did, however, find a fat bottom half of a tree in a corner. The top had been broken off it and although she wouldn’t give it to me for free, she did agree to sell it to me for $7. My husband also got a great deal in a short/half-bald tree at another Home Depot and I cut them both apart to fill the containers.

With the bulk of the evergreens in, I filled in with “special” evergreens including a variegated boxwood and seeded Cedar, all of which I bought in bundles at a nursery. The window box also got a few faux berries (that claim to be waterproof, but I’m suspicious) for a little zing, and the big pot by the front door  got some curly white twigs I found in the faux floral department. They are not meant for outdoor use, which is why they are no long curly, and I don’t expect them to last much beyond Christmas, but I thought a cheap shot of white might be nice in that pot. 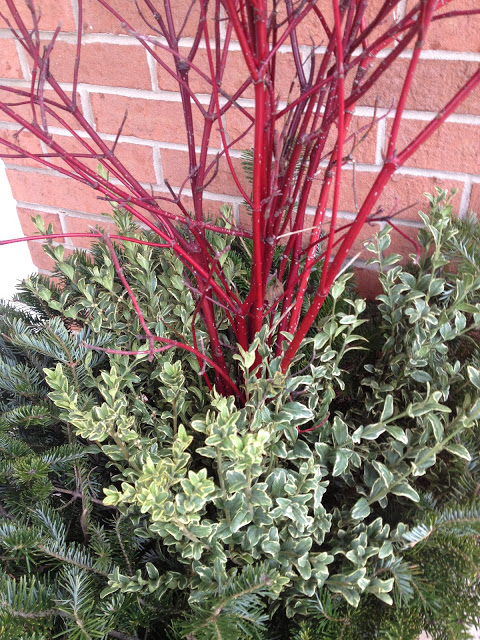 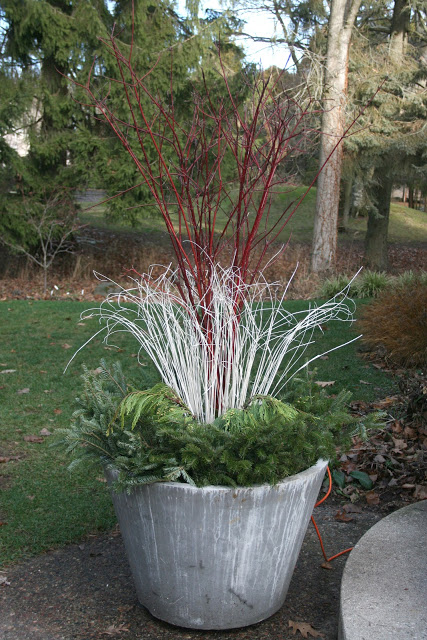 Throw in a few lights, and I was done. I love them all and hopefully they will last well into March when I’ll be ready to be thinking about spring.