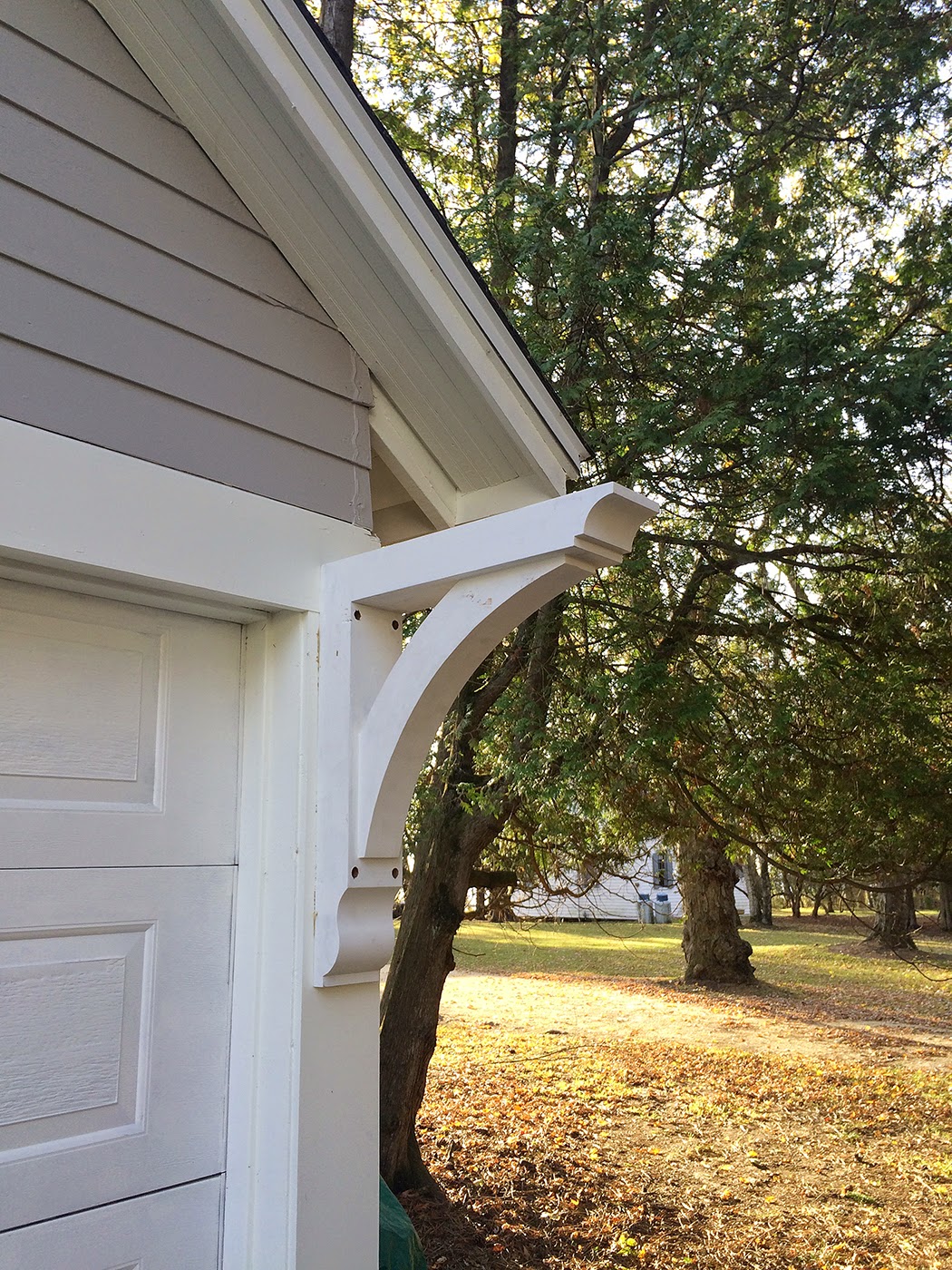 Did you all enjoy the weekend? As much as I am not a fan of the whole outdated concept of Daylight Savings Time, the Sunday in fall after we turn back the clocks has to be the single most productive day of the year. You work and work and work and you look at the clock and it’s only 11 a.m. I love that.

Last weekend was meant to be dedicated to one of big projects at our house. I speak, of course of the garage pergola, a project that I’ve been swearing we’re going to do for more than a year (I first wrote about it here).

And here’s where it’s at. 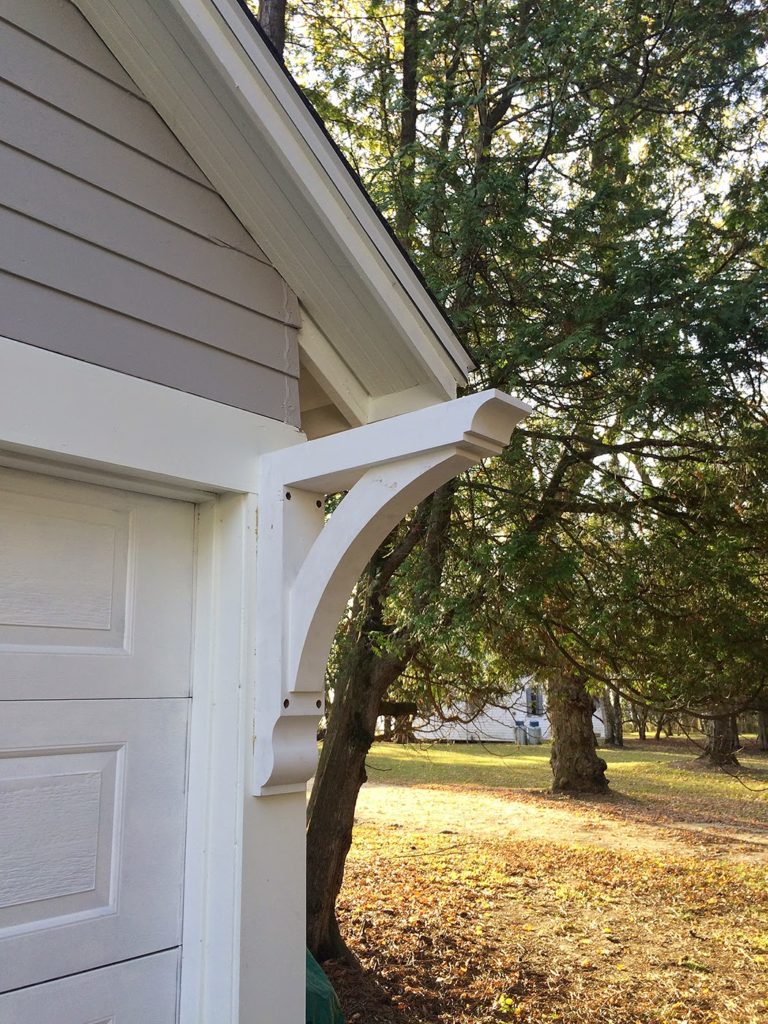 After two days of working on it, we have two brackets up. That’s it.

Allow me to fill you in on the details. But first, let me put this in context. Mr. Much More Patient is not in favor of this project. He thinks pergolas are dumb and serve no purpose (and this one really does serve no purpose other than to pretty up the garage). It is clear that if it were up to him, there would be no pergola.

Because that feeling was pretty clear from the beginning, the first thing I did last year when I cooked up this idea and got a hesitant “OK” from MMP, was buy the brackets from prowoodmarket.com.

Lesson No. 1 in how to get your partner to get on board with a project they are clearly not jazzed about: Buy the most expensive supplies first. Once you’ve committed the money to the project it becomes real and therefore must be finished.

Because he’s not really a fan of this idea, MMP has been dragging his feet big time on this. A couple weekends ago it couldn’t be done because we had to deal with all the fallen leaves. Other weekends there were mysterious “meetings” that couldn’t be avoided. After he had used up ever possible excuse, he had to gather supplies.

And if you’re trying to avoid a project, it can take a LONG time to gather supplies. In fact, MMP spent Saturday morning going to the dump (we don’t have local garbage pickup by us) … twice. Then he spent a lot of time with a pad of paper and a pencil making some notes. Then he ate lunch. And then, just as he was walking out of the door to go gather said supplies, we noticed that a tree on the northeast corner of our lot had fallen down and upon further inspection, realized that it had fallen on our neighbor’s cherry picker that he uses for work. MMP went to gather supplies for (I swear) hours and when he came home he had to go to town on our stupid fallen tree and well, Saturday was kaput. 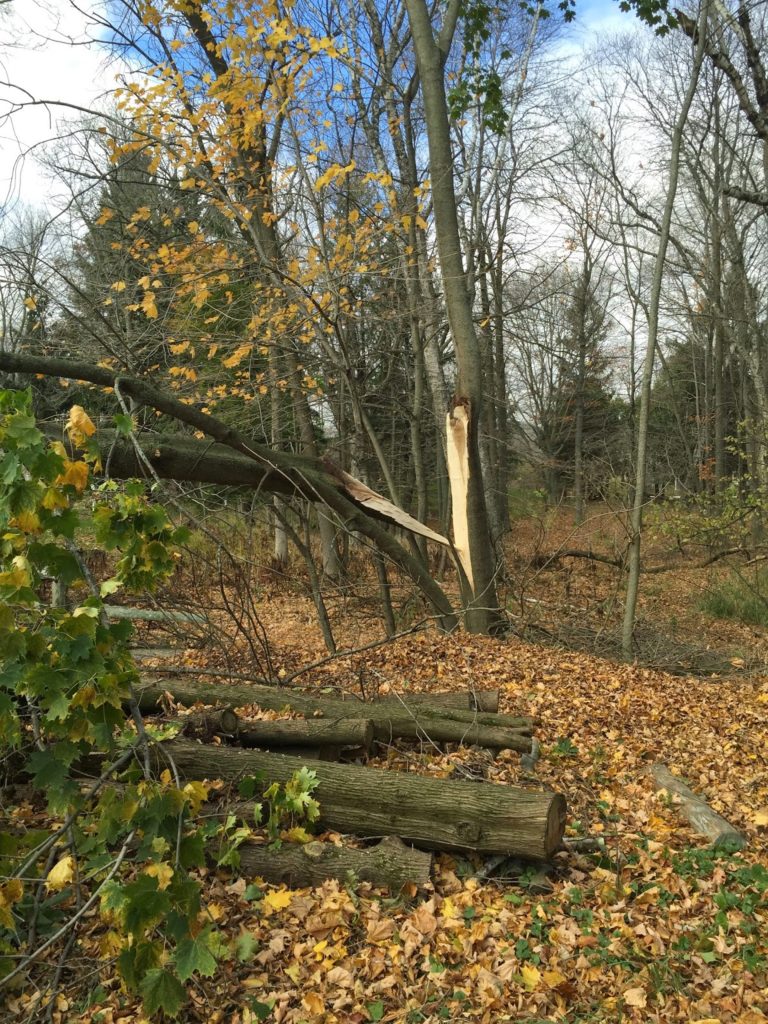 MMP had no excuses left on Sunday so we actually did get down to business. The problem was that we were a little unsure about measurements, mostly how high to mount this thing. Higher is better, but then it will overlap (not hit, but overlap visually) with the corner of the roof which we thought would look weird. Honestly, I still have concerns about the height, but there’s no going back now.

Anyway I won’t bore you with more details, but basically it took us a few hours to mount the two outside brackets. We’re waiting on the middle bracket until we finish making the main “beam” that will span across the width of the garage.

That is going to be made of a double width of 2x8s, with two 12-footers in front and a 12-footer and two 6-footers sistered onto the back. The whole thing will be about 24 feet long. The problem? We’re not sure we’re going to be able to get a 24-foot-long “beam” out of our basement because of the angle of the exit.

We also found out that the router that we have (my father-in-law’s, I think) does not accommodate a long bit, meaning that we can’t cut the detail on the end of the boards that make up the top part of the pergola until we figure that out (the curved bit would be very difficult to cut with a jigsaw).

Anyway, how’s that for an update? But what are you going to do? Sometimes projects don’t go as planned and a lot of time they take a lot longer than you planned. In this case this one has taken about a year longer than I had planned.