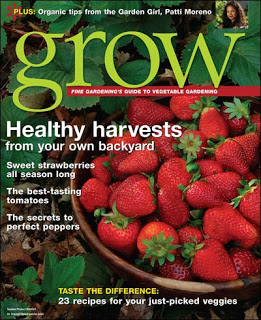 I caught my mother rubbing her eggplant this weekend.

Relax, it’s OK, really. She was just giving it a little leaf massage. Seems she read “somewhere” that massaging the leaves will make it produce better.

I can’t tell you where “somewhere” is because neither of us knows. We read so many magazines, blogs and Web sites, not to mention watch the occasional television show, that the actual source of any of these so-called secrets is anybody’s guess.

So while my mother is massaging her eggplant, I was busy contemplating my tomato planting technique. First I heard you should plant it deeply because new roots will form off the buried portion of the stem. Fair enough. Then I read you should actually trench it, and lay it down sideways, so it’s closer to the top of the soil and therefore warmer. I’ve done both of those things for several years now. This year, I skipped the trenching, partly because I was lazy and it’s not that easy to make the stem bend in the proper direction when planting a tomato sideways, and partly because I was planting in my fancy new raised bed with super fluffy dirt that I would think is plenty warm.

Then there’s the fertilizer issue. Some information suggests you should fertilize at the time of planting, when it flowers and again some other time that I can’t recall (and it doesn’t matter because I’ll have forgotten by then). Other information says not to fertilize until after it flowers. Geez louise, who am I supposed to believe? I ended up pouring a lot of diluted Great Big Plants in the hole when I was planting. I figure that’s sort of the fertilizer middle ground.

Then there’s the pruning issue. The lastest issue of Grow (published occasionally by Fine Gardening Magazine) said I should remove all the leaves below the first flower cluster to make the plants stronger and avoid diseases. Makes sense … I guess I’ll do that. Probably.

I’ve done other crazy things to plants because you’re “supposed to.” Some work, some are definitely up for debate. I do regularly pour a diluted ammonia mixture over my hostas and slug-prone plants. I did it last year and really feel I had fewer slug problems.

I also plant my clematis deeply and on an angle and I’d say this is another thing that works. My two Guernsey Cream clematis are pushing up so much new growth this year I’m having a hard time containing it, and I think it’s because of the diagonal planting.

I planted an eggshell and a morning’s coffee pot worth of coffee grounds with a rose last year. If it did anything, I couldn’t tell ya.

But I can assure you that I’ve never, ever, massaged an eggplant.

What crazy-sounding things have you done to your plants? And better yet, did it work?

Note from the editor: No eggplants were harmed in the making of this blog.