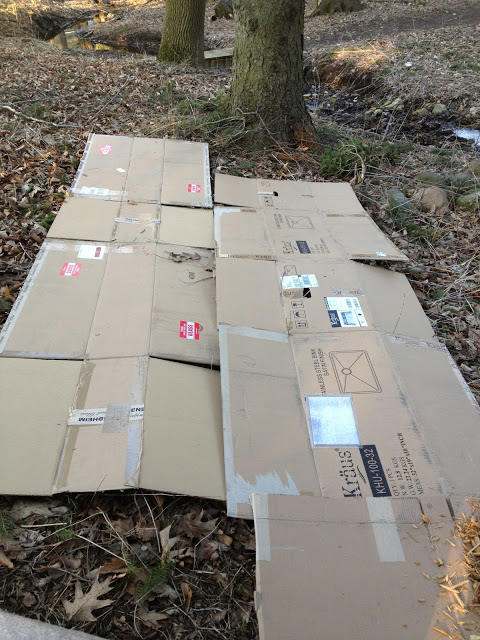 We’ve had just about two straight weeks of rain here, but I’m not complaining. For one, we need to fill up Lake Michigan which hit its all-time historical low water mark this winter and for another it could be so much worse. North Dakota got so much snow earlier this week that the federal government gave residents of the state an extension on filing their taxes!

But the sun shone yesterday and I was thrilled to have a little bit of time after work to do a very quick project outside. Other than the raised vegetable gardens, all of the gardening I’ve done is on the house side of the small creek that runs through our property so right now the area just on the other side of the creek is a bit ratty. I’ve done exactly nothing to that area and I don’t have plans to do anything anytime soon. I could see myself transplanting some woodland plants or ferns when I have extras to spare, but it will be awhile before that happens.

But I’m sick of the weedy mess over there, so in approximately 15 minutes, I did what I think is the easiest way to reclaim a weedy area. This is also my favorite way to start a new garden bed, but it works equally well to just spruce up an area too.

In this case I just used some of the cardboard boxes we had laying around, flattened them and covered them up with mulch. I didn’t have enough cardboard to cover the whole area, so as I get more I’ll add it to fill in those spaces. Normally I would follow up with a good dousing of water with the hose to keep things from blowing around (you could also use a few rocks if you were doing it in a particularly windy area), but I knew we were due to get a deluge over the next couple days so I let Mother Nature handle that part. 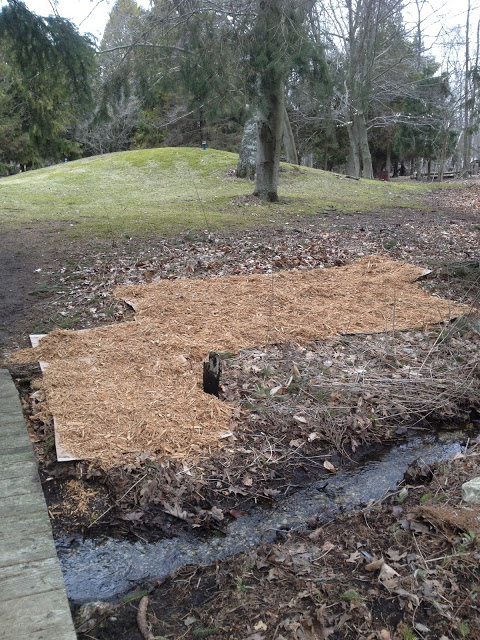 I have also used this method with newsprint (or newspaper). I usually layer the newspaper quite thickly, maybe with six or seven layers and if there is any wind at all using newspaper can get frustrating quickly. That’s why I prefer to use newsprint end rolls. This is what is left on the end of a giant roll of newsprint when they print newspapers. If you have a newspaper printing operation nearby call and ask if they have end rolls: most give them away for free because otherwise they have to pay to recycle them. I run the roll back and forth until I have the number of layers I want in a section that is about 15 or 20 feet long (or less if you’re working with a smaller space) and then lay it down in one big section. I prefer to use the newspaper or newsprint method for beds I plan to plant in within a year because it breaks down more quickly than cardboard. For areas where you’re just trying to keep the weeds at bay, the cardboard does a pretty good job.

It doesn’t look like much yet, but in a few weeks the mulch won’t look so new and it will be nice not to look at a pile of weeds when we walk across the little bridge across the creek.

In other news, I was just thinking the other day that it’s time to start brainstorming ideas for this summer’s containers, and then I chided myself for even thinking that when I still have the containers “planted” for winter. 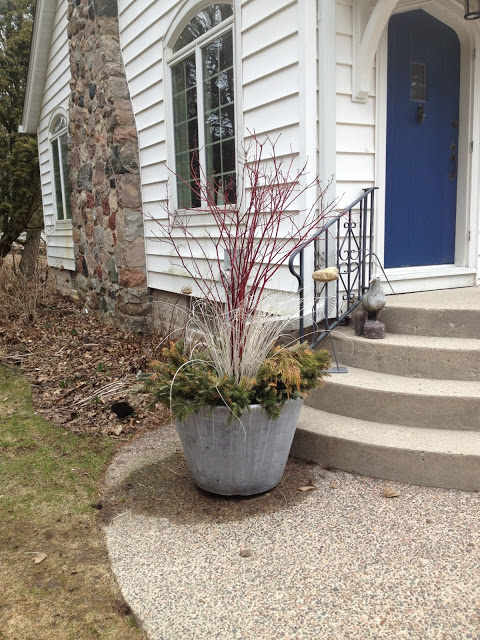 In my defense, there is still snow in my yard so I think I get a pass. Maybe.