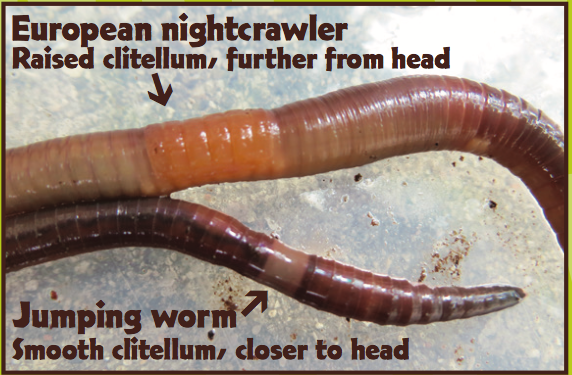 I used to dig in my garden, unearth a worm and be delighted. I took it as a pat on the back for my hard work in making good soil that earthworms would want to be in doing their good work. But for the past year or so that delight has been gone. It has been replaced with dread. Dread that one of those worms would be unlike any other worm I’d encountered in my garden before.

A few years ago the first so-called jumping worms (aka Amynthas agrestis) were spotted in Wisconsin. They’d made their way here originally from Asia with stops in many northeastern and Midwest states and now at least Oregon in the Northwest. Call them crazy worms, Alabama jumpers, Jersey wigglers, snake worms or some variation of those, but I’ll tell you what I call them: Bad news.

These worms, which hang out on the upper layers of soil, are massive digesters of soil. This is not a good thing. What they leave behind is loose soil resembling coffee grounds and largely devoid of nutrients. Give them a little time and they destroy the composition of the soil to the point where plants are no longer anchored.

They reproduce without mating, laying impossible-to-find cocoons in the soil that overwinter even in cold areas, and oh, by the way, they mature so quickly that two generations can be produced in one season. They do their damage quickly.

Earlier this year, Jeff Epping, director of horticulture at Madison, Wisconsin’s Olbrich Botanical Garden, where the worms were found a couple years ago, reported that a 5-year-old stand of Arborvitaes in the garden were all leaning to the east after a strong storm with west winds. These trees, which should have been well rooted, appeared to have been rocked because they aren’t properly anchored in the loose soil. And Epping has dealt with them in his own garden. In May he reported on the damage he’s noticed.

“I am also living with them in my home garden and have noticed very significant changes in my soil in parts of my garden,” he wrote. “My soil structure has changed from typical silt loam soil to a granular, almost sandlike loose structure. The granules are so loose that I can easily scoop my hand into the top 3 to 5 inches of soil with minimal effort. The soil granules also seem to be a bit hydrophobic and certainly not moisture retentive. During periods of drought in the summer the plants in the worst jumping worm areas suffer from lack of moisture, way more than the areas where the worms are less concentrated.”

In other words, no way in hell do I want these things in my garden. The odds, however, are not my favor. In fact, it’s probably more of a matter of delaying the inevitable, because the worms are close. I knew they had been found in our county, but last week as I was working in a garden maintained by our master gardener group, I found a very suspicious worm. My master gardener training suggests that what I should have done was carefully collect the worm, study it to see if it matched the description of a jumping worm, photograph it, then put it in a Ziploc bag for further identification if needed and to solarize it before disposal (yeah, that means what you think it means: Cook it in a plastic bag in the sun). Instead what I did was scream, jump around, flip it onto the sidewalk, poke it to see how it moved, take a couple videos of it, squish it and throw it in the busy street. Because I’ll be honest, I’m grossed out and I’m freaked out.

I’m waiting for positive confirmation from the DNR, but I have no doubt it’s a jumping worm. When I went back later I found the distinctive coffee-ground soil and four more worms without looking hard. With my wits about me (and, um, another gardener with gloves) we bagged these.

Sidenote: Literally in the middle of writing this I received a call from my sister-in-law, who lives a couple miles from the garden I was working in and about 10 miles from my house, that she found several jumping worms.

Here’s a really gross video from the Milwaukee Journal Sentinel:

Right now, my focus is on crossing my fingers that I can keep them out of my garden a bit longer and that means that I’m taking a lot of precautions.

So what do you need to be on the lookout for if you live in an area where jumping worms have been found? Here’s how you can identify them:
What to do if you find them:
Invasive species (both flora and fauna) happen, unfortunately. Rarely do we want to deal with them, but they are a fact of life. This one is particularly scary because it can do such serious damage (which goes well beyond the impact on gardeners; it could be catastrophic for agriculture) and as of now, there’s no real method of control.
I’ll do my best to delay their arrival in my garden, look suspiciously upon every worm I encounter and yes, I’ll probably scream, swear and generally freak out when the day comes that I find them. Some days that’s just how it goes in the garden.
More information on jumping worms:
worms
by Erin @ The Impatient Gardener
17 Comments
previous post: IT’S TIME TO TALK BULBS + SOME FOR YOU TOO
next post: THE BEST PLANTS IN THE EARLY FALL GARDEN