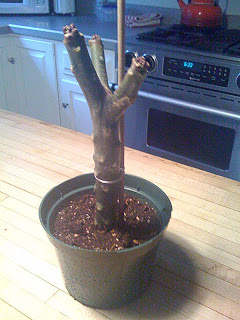 This is my plumeria. While at the Philadelphia Flower Show this year, my mom, sister-in-law and I saw these for sale. Three for $20. So we bought them and decided to have a competition. First one to get a bloom wins. Now we’re starting to think the first one to see a leaf wins. We dutifully potted them up. I read up a little on what to do. And then I waited. And I’m still waiting.

I read I wasn’t supposed to water it until it started leafing out, but the soil got bone dry so I’ve been trying to just ever so slightly moisten it. Mostly I just try to keep the cat from knocking it over.

The funniest story relating to these plumeria cuttings (which we’ve since learned basically came from QVC, apparently it was their plant company that was running the booth we bought them from), is that my sister in law was stopped at airport security on the way back from the show. They checked her bag several times and then asked, “Do you have a slingshot?” Of course she said no, until they pulled out the plumeria. When she told them it was a plant all of the security folks were laughing about the stick this crazy woman thought she was going to stick in the ground and make grow.

I’m beginning to think they knew something we didn’t know.

(Apologies for the wretched photo. The camera situation should be sorted tonight.)

plumeria
by Erin @ The Impatient Gardener
3 Comments
previous post: Fun sponges need not apply
next post: Critters in the garden