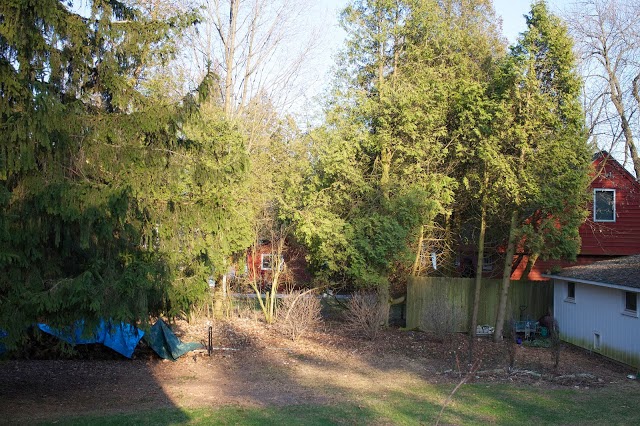 Like pretty much everyone, I’m anxiously waiting for spring to show up. But a girl can only paint so much stuff in her house before the paint fumes take over and you have to give in to the pent-up gardening urge. So, over the past couple weeks, I’ve been redesigning the back yard.

First of all, it’s really the side yard, but we call it the back yard because the true back yard is pretty much the woods. It does back up on our neighbors so maybe it makes more sense in that context.

The trouble spot for as long as we have owned our home has been the area north of the garage. It has always been a weedy, forgotten about part of the yard. But when you look to the east, where you can catch a glimpse of the lake, you’re looking right at it. Plus, it’s not a very attractive view for our neighbors.

Up until about three years ago it was made even worse by a 1,000-gallon propane tank. At some point I planted a small garden with a reed fence to screen the tank. I always sort of hated that garden. It was a weird, kidney bean-shaped thing that was too small to make sense, but it was a horrible place to try to dig in the dirt as it was filled with roots from a nearby birch tree.

Once we got the tank out of there (after switching to natural gas) we were able to clean out all the weedy areas and the dead shrub skeletons, and we planted three large Arrowwood viburnums. These should get about 8 to 10 feet tall and provide a nice screen from the neighbors but still look nice.

Then last year, the big birch came down, creating much more sun in the back yard and making the kidney bean bed look even worse.

After seeing this post about “positive” space in garden design I started playing around with a few ideas back there.

Here’s a rough idea of what I came up with. The big dark circle to the left is the giant spruce in the yard. I think it is probably even bigger than I’ve drawn it.

For reference, here’s an overhead view of that part of the garden last summer. 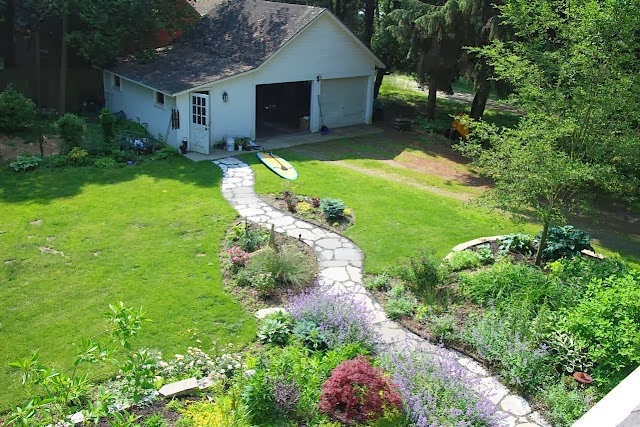 The idea is that the lawn takes on a perceived elliptical shape, overlapped by the ellipsis formed by combining the two gardens that border the path. I say perceived, because the ellipsis is not bordered on all sides, but my intention is to create enough border that it is implied.

What love most about this plan is that it creates an area to the north of the garage that finally makes sense.

What I’m less sure about is opposite that where the ellipsis will meet the retaining wall in the garden off the deck. I’m just not sure how that’s going to look with half circles going opposite directions there.

The scale of these drawings is a complete guess and it’s not one of the things I’m particularly good at. Scale has always plagued me, but until the snow melts enough that I can actually get out there and really look at the space and maybe drag a hose around for a bit, I can’t be sure how it will all work.

I think (and hope) that I’ve got the scale wrong on the plants as well. That would be good because right now I need approximately one million plants to achieve this new look. (An aside: When I got the circle template and started working on this, Mr. Much More Patient said, “Those look like really expensive circles. I think you should stop drawing so many of them.”)

This is a very rough idea of what might happen by the deck. I didn’t draw in all the existing plants in the area between the deck and the stone retaining wall, but that area is pretty well filled in with existing plants.

Here’s what  it looked like last July (by the way, the as-it-is garden tour I did last year, where I didn’t clean up anything, just took the camera and started shooting the garden has been extremely helpful in remembering what the garden actually looks like. I think every gardener should do this multiple times through the summer, just for reference). 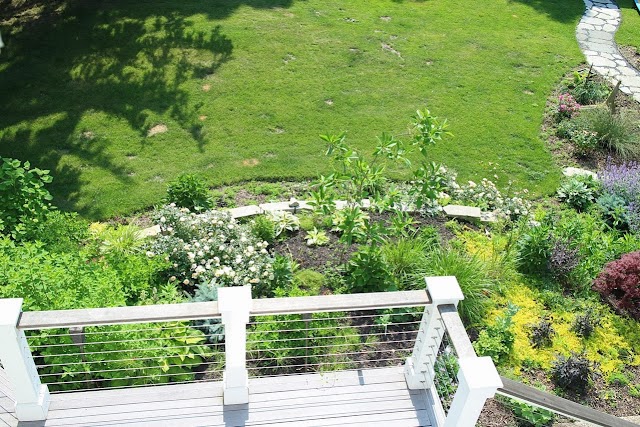 I’ve specified some plants in the plans, but they are really a first crack at it. I will, of course, be using the existing plants from the kidney bean garden and moving a few things out of the garden by the deck that just can’t handle the amount of sun that is there now that the birch is gone. I know that I would like to add another viburnum in the back and some sort of focal point small tree or shrub in the middle of the far side.

I will also connect the two beds that flank the path to create an ellipsis with a path running through it. I think I probably should have done that from the beginning. And on the other side of the path, near the patio, I think I should continue the curve created by the retaining wall around the Serviceberry tree, so some plants will come out of that area as well.

Now, if only the snow would melt.