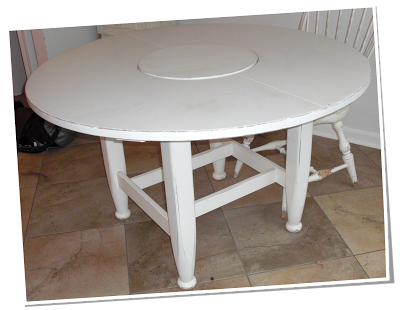 I  t’s official: I am the worst person in the world when it comes to taking “before” pictures. I get halfway through a project and think, “Oh shoot, I should have taken a picture.” So about halfway through I take a photo. Or worse yet, it’s too late and I have to look through all my old pictures for something that sort of resembles a before.

And wouldn’t you know I’d do it with one of the biggest projects we’ve taken on? Our small kitchen (of course it’s small … the whole house is small!) is divided into two parts, the entry/eat-in area and the working part of the kitchen. When we bought the house as first-time homeowners we were lucky that the previous owner left quite a bit of furniture behind. (Moving day was a total fiasco … her moving truck was late and small, and we had one day off of work to move in, so at some point we started moving our stuff in the basement while her stuff went out the front door. Her truck was filled and she just left … leaving lots of furniture behind, which was a blessing because we had very little in the way of furnishings). Among those thing were the kitchen table and chairs. I love the table: round with a lazy susan in the middle. Unfortunately it only sat four people (and that makes it real hard to entertain when you don’t have a dining room) and the round shape really wasn’t right for the room. I always felt like I was walking in the back door right into the table. Couple that with the lack of a coat closet anywhere near the door and we ended up with a cramped entry area.

Anyway, the best picture I have of the before is the one I took to sell the old table, which doesn’t really give you an idea of what the eating area looked like before at all … but squint or something. We had to angle it so that the chair wouldn’t be directly in the path of the door and we had to sort of squish it in the corner unless we had people over.

The banquette has been a work in progress for awhile.  Here’s what it looked right after it was installed. There are sliding doors with oodles of storage underneath and a large drawer that pulls out the other end. 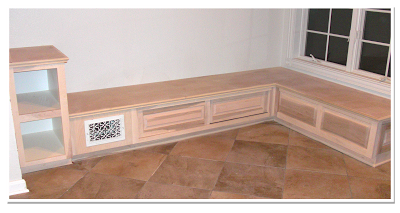 And here it is now, painted and with its new microsuede cushions I had made by a local upholsterer. (To read more about the paint I used, click here.) And already cluttered up on the shelf, but that’s only because we were working on projects today … I swear! 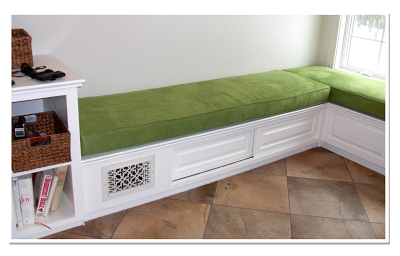 My mom is helping me out by making a number of throw pillows for the back. So stay tuned for more!
banquette
by Erin @ The Impatient Gardener
5 Comments
previous post: Onions are ordered!
next post: The lazy gardener’s guide to seed selection