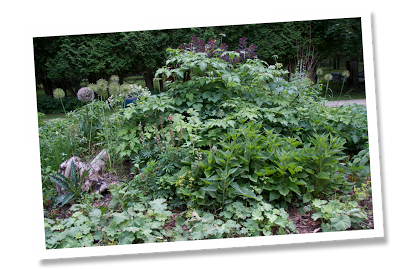 It’s a good thing there is no social services organization that regulates garden care, because I would most certainly be under investigation. I’m really embarassed about it and I’m not sure how things slipped away quite so badly this year, but the current state of my garden is somewhere in the realm of reprehensible.

For a time, this garden was a nice space. Now it’s just a hot mess.

The weeds are plentiful, to be sure, but not as bad as I would expect. Of course the reason for that is that parts of the garden are now getting so mature that they are doing what I had hoped they would do: cover as much space as possible so as to not give the weeds a place to be. But that brings on its own set of problems. What I call the “main” garden, located right off the patio is now about seven years old. It was the first garden I ever made in my life, and at the time I was more concerned about filling it up with plants as quickly as possible than I was with any sort of design concept. I’ve remedied a few of the problematic areas over the years, but one large section of it is now in bad shape. The anemones (a late-summer blooming pink variety, but I couldn’t tell you what it is) are taking over,  both in height and width. They are running into the black-eyed susans, which, of course, have been running amok for years now (and isn’t that just a great color combo … orangey yellow and pink? eek). Worse yet, the two plants have foliage that is similar in color and size so there’s not even an interesting texture thing going on.

The sweet woodruff I spread around has done what I THOUGHT I wanted it to do, but as it turns out, maybe I didn’t really want it to do that after all.

It’s time to face facts: the garden needs an overhaul. So I have a little something to think about there.

The shade garden I started last year is progressing well, but hasn’t even been fully edged yet, much less weeded in the last two weeks. It, too, needs attention.

Along the west side of the house, I’ve finally purchased something to replace the Kamagata Japanese maple I lost last year, but I’ve not planted it yet because we’re having some work done on the chimney soon and I’m afraid that will be in the firing line.

Another offshoot of the “main” garden is destined to be dismantled later in the summer when we have some work done to the house and they need to use that area. It too will need to be redesigned. 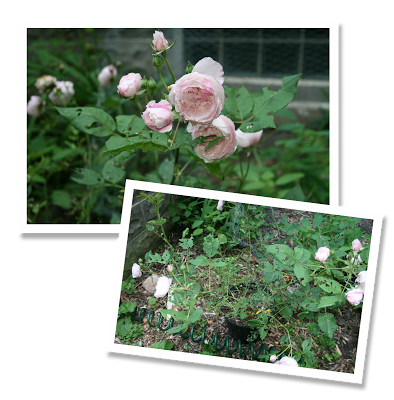 This is Madam Pierre Oger and she is a beautiful French bourbon rose that smells better than any flower in my garden. She’s still in a pot because I’m not entirely sure where she’s going, but she’s blooming anyway. But back up a little and look at her foliage. It’s awful, and unfortunately many of the roses in my garden look like this. I think the culprit is a little green worm.

And then I have oodles of plants sitting in the Pit of Despair that I keep swearing I will get in the ground but they’ve not gotten there yet. I feel bad planting things (which I consider a “fun” garden job) when I haven’t even finished weeding (not a fun garden activity). One of them is a stunning French rose I picked up at the Master Gardeners Heirloom Plant and Herb Sale this year. Unfortunately, like almost every other rose in my year it has been completely defoliated by some kind of little green worm. I don’t know what it is, but a gardening friend has the same thing going on in her yard. Still this rose is putting out the most amazing smelling blooms.

So, I have my work cut out for me. The good news is that my garden won’t tell on me.