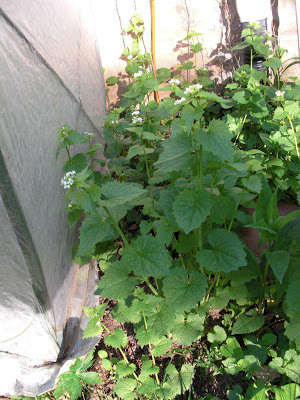 I have met the enemy, and it is Alliaria petiolata.

That was all my friend’s Facebook status said the other day. I instantly knew her pain.

Alliaria petiolata, better known as garlic mustard weed, is the kind of thing that can ruin your day and maybe even your summer. And many summers to come.

If you’re not familiar with this insidious weed, thank your lucky stars. But then keep reading. Because the second you find it in your yard you’re going to want to be prepared to deal with it.

Here’s the quick rundown on garlic mustard weed. It is native to Europe and was brought to America for use as a culinary herb. Unfortunately it escaped the confines of the kitchen garden and has been taking over ever since. It is a biennial which makes it extra tricky to get rid of: even if you are particularly dedicated one year to getting rid of it, baby plants are lurking to strike the next year. Perhaps the worst part of garlic mustard week is that it produces a chemical that essentially poisons the soil, so that native plants cannot thrive and eventually the garlic mustard weed takes over. 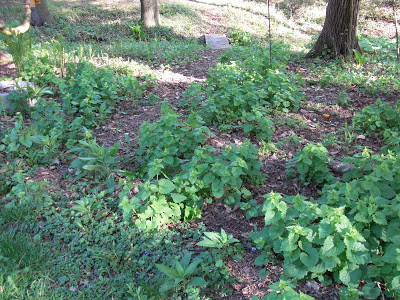 The area by the bird feeders is full of garlic mustard weed, but fortunately it pulls out easily.

Obviously it must go. The only good news about garlic mustard weed is that it is easy to pull. The best time to pull it after a rain, when, as long as you grab it near the crown, it will pull right out, along with its big tap root. Try to pull it before it flowers, and before there’s seed to be spreading around. Pull it and put it straight in a garbage bag. No composting or burning this puppy. And don’t be tempted to do what I’ve been known to do: pull it and lay it on the ground until you can collect it. If it has flowers, it can still spread the flowers just laying there. In fact those nasty little seeds can stick to pant legs, dogs and your shoes, so you’ll be tracking the stuff everywhere. 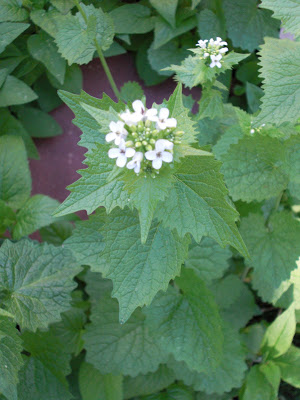 Don’t be fooled by that dainty white flower. This is one white accent you DON’T want in your yard.

Since garlic mustard weed pulls so easily, it is really the easiest way to tame it. Relatives pay kids $1 per bag of weeds to pull it (although as they get older, the kids have wised up and are charging more). The good news is that you CAN make a dent in an infestation. The bad news is that unless all of your neighbors work equally hard, there’s almost no way to eliminate the problem because of those nasty seeds.

But one thing is for sure, if you don’t do anything, eventually it will ruin your landscape. So get to work!

And just in case you subscribe to the “if life gives you lemons, make lemonade” mantra, give these garlic mustard weed recipes a try. But don’t bother telling me how they taste … after pulling hundreds of bags of the stuff over the last several years, I don’t even want to think about it, much less eat it!