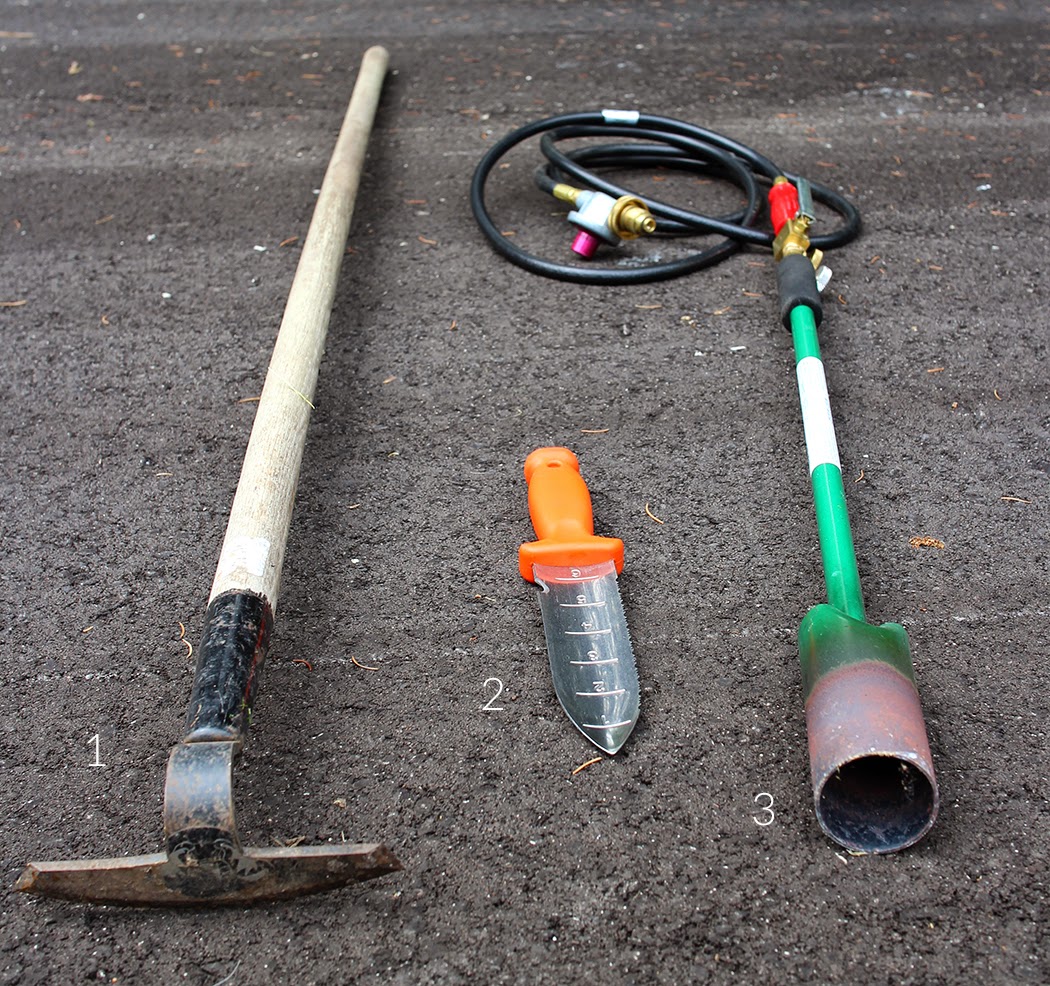 We started with my four most used tools and yesterday I covered pruning and raking tools. Today I’m going to hit you with all the rest, so hang onto your hats.
Just to review, these are my favorite tools that I use for specific jobs in the garden. My entire tool collection numbers far more than the tools I actually use frequently, though.
First up, my favorite weeding tools. In case you missed it, here are the main ways I deal with weeds (without chemicals) and all of these tools were mentioned in that garden.

1. HOE
I don’t know what you call this kind of hoe, but generally speaking, it’s a push hoe with sharp corners that work to sort of pluck out deeply rooted weeds. I think I’d prefer a hoe that works on both the push and the pull stroke though.
2. A.M. LEONARD DELUXE SOIL KNIFE
Are you noticing a pattern? I obviously use this thing for everything. Read more about it in Part 1.
3. WEED DRAGON PROPANE TORCH
Read the weed article for more about this dangerous, but super fun, tool. I also have a small hand truck to pull the propane tank around and I would really miss that bit. Garden Tool Co. has the torch bits on sale for under $55 right now.
EDGING TOOLS
I don’t particularly love the process of edging but I love neatly edged beds and I can pretty much do anything I need to with an edge with these three tools. I should add that for awhile I used a half-moon edger, but that is now lost in the depths of the garage since I narrowed in on these tools.

1. A.M. LEONARD COMPOSITE HANDLE SPADE
I didn’t buy this spade specifically for edging, but when I got it, I realized it was WAY too heavy for efficient digging, but its flat, heavy blade works really well for hand edging. I use this for small edging jobs or to do the heavy lifting when creating a new bed.
2. BAHCO LONG-HANDLED EDGING SHEARS WITH VERTICAL BLADE
These “shears on a stick” are new to me this year, but I am really loving them. They are long enough that you can stand up straight to use them. You set one blade against an existing garden edge and then move your right hand to slice through any grass that has sprung up. It has the most lovely slicing noise, too. This is great for a quick touch up and I’ve found by hitting my edges with this every couple of weeks, my initial edging at the beginning of the season will probably last all summer without having to bring out any other tools. If you’re sort of nutty about your edges, this is a good tool to look into, and far preferable and safer for your plants than the weed eater.
3. BLACK AND DECKER 2-in-1 LANDSCAPER EDGER
First off, I have no idea what the 2-in-1 portion of this machine is because I only use it for one thing: cut edges. What I really wanted when I started looking for a power edger was a big gas edger. And then I discovered that those are really really expensive, so unless you run a botanical garden, you probably don’t need one (or don’t want to spend the money on one). I think I picked this up for about $100 and I’m OK with that price considering how much I like it.
It’s electrical, so you do have to drag out the extension cords to use it and that’s the main reason why I don’t use it more often than I do. But it cuts a nice sharp line in the soil in seconds. I do go back and clean up the edges, usually on my hands and knees with my soil knife, just pulling away all the excess material on the bed-side of the line, but all of that still takes far less time than doing the whole thing by hand with a half-moon edger or spade.
WATERING
Back in the early years of this blog, I lamented the lack of quality watering tools available for home gardeners. I was so sick of leaky everything, constantly wet sleeves and hoses that didn’t last a year. Well I am very happy to report that manufacturers have really stepped up and improved the quality of watering tools.

1. DRAMM COLORSTORM TURRET SPRINKLER
Dramm, which is manufactured just up the road from me so I admit some local bias, has professional and consumer lines. The professional products are harder to find and you usually have to go to a nursery-supply company to buy them, but in some cases they are worth seeking out. Their Colorstorm line is by far their biggest consumer line and for a lot of products, the quality is similar to the professional lines. I have a love-hate relationship with sprinklers. For the most part, I don’t like to use them but at the same time, sometimes you just don’t have time to hand water everything. I like this sprinkler because you can pick the water pattern. I usually use the half rectangle or semicircle patterns so I can set the sprinkler on the edge of a bed and it will just water the plants in the bed, not anything behind it.
2. TUFF-GUARD PERFECT GARDEN HOSE
I’ve written about this hose before, and the fact that I still love it is actually the best testament a person like me, who used to replace hoses annually, can give a product. Here’s what I like about it:
It has one negative to it and I’ll be honest, Mr. Much More Patient crabs about it somewhat regularly. It’s a bit springy, so you pretty much have to use something to store it, rather than just coiling it up in a corner. I use a hose container and it is perfectly well behaved there (and comes out easily, again without kinking). Plus, I think it looks a heck of a lot better in a container than just coiled up on the patio.
I have two 50-foot lengths connected and have used them for at least three years with no complaints. I have never had a hose last so long. In fact, we still have a traditional hose connected on the back of the hose that I use pretty rarely and I’ve gone through two hoses in that time and the stupid things kink all the time.

3. DRAMM WATERING WAND AND WATERBREAKER
I have a couple of these and sort of mix and match the parts as needed. The one I use most is the 30-inch wand with a pull handle on it that I got at the hardware store. It’s part of their Colorstorm line. But it came with a plastic nozzle that I don’t care for, so instead I use an aluminum waterbreaker from their professional line. I’ve had all of these for several years and as long as I occasionally put in a new rubber washer, leaks are not an issue.

4. WATERING CAN
This is not exactly exciting stuff. I’m sad to see that Gardener’s Supply seems to have discontinued this watering can because I really like it. The best thing about it is that it has a 3-gallon capacity. I hate lugging water around in cans, but what I hate even more is having to make a bunch trips for more water. There is a nozzle for it, but it seems to get clogged easily so I rarely use it. I’ve found that if I carry it backwards when it’s full, it doesn’t slosh out. I have no idea why, but it works! After about five years of use, it is starting to crack a little on the top, but I don’t think you can complain about that.
WHEELBARROW

How could I not include my trusty wheelbarrow in my round-up of my favorite tools? This is only the second wheelbarrow I’ve had and it serves me well. It’s got a large capacity bucket (I do not understand the point of a small wheelbarrow) and I quite like the double front wheels. I can’t take it directly into beds because of the wide wheels, but I don’t find that to be a big problem.
I would say that wheelbarrows are one of those things that it pays to just buy a really good one from the beginning. Cheap, wobbly wheelbarrows are awful.
Well, all but one of them are. My first wheelbarrow was a cheap, wobbly one and it was great and I’ll tell you why. Mr. Much More Patient proposed to me with it.
We had purchased the house six months earlier, so we needed homeowner stuff and had pretty much no money. Our Christmas gifts to each other had to be practical. I got him a chainsaw and he got me a cheap, wobbly wheelbarrow. But in that wheelbarrow was an engagement ring. Did he have me pegged or what?
Even though I stopped using it a few years ago, I hung onto that wheelbarrow for ages. Finally Mr. Much More Patient asked me this spring if he could take it to the dump. I’m not a super sentimental person and I hate clutter so I reluctantly agreed. I can’t tell you how much I regret that decision.
Oh well, I still have the ring (even if I don’t wear it during gardening season) and, more importantly, the husband. And he even pushes the new wheelbarrow for me sometimes.
So those are my favorite tools. Please keep telling me about yours. I want to look in to some of them. Next week I’ll tell you about a few things that I don’t have that I think I probably should (spoiler alert: I may have already picked up a few at the Garden Tool Co. sale).
edge hose tools watering wheelbarrow
by Erin @ The Impatient Gardener
3 Comments
previous post: MY FAVORITE TOOLS (PART 2: PRUNING & RAKES)
next post: LABOR DAY WEEKEND LABORING