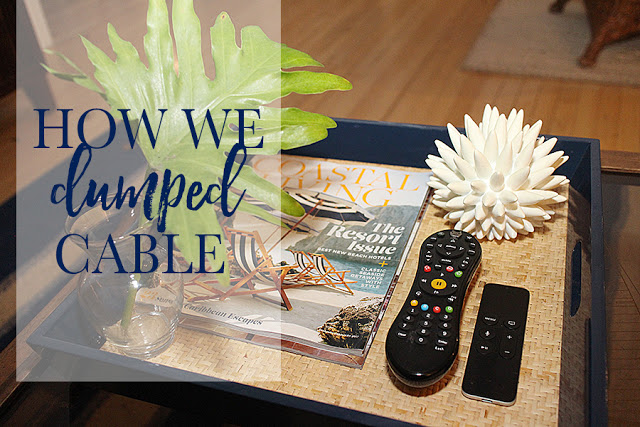 We are free of cable television. I feel like shouting it from the rooftops. The cord is officially cut.

This is a move that we’ve been seriously contemplating for at least two years. Every month the cable bill would come and I’d shake my head at how much we were spending for television. Or worse, I’d avoiding looking at it and just pay the bill and try not to think about it. A few months ago I really studied the bill and I’m embarrassed to say we were paying $190 for cable, premium channels, broadband internet and telephone service and that put me over the edge. It was way too much.

The premium channels snuck in there. In fact we weren’t even watching anything other than HBO because we didn’t realize we had it. At one point Time-Warner Cable (now Spectrum, apparently) gave us three free months of premium channels. I distinctly remember calling and saying I didn’t want their “free” offer if it would automatically added on to my bill at the end of the promotional period but the cable company will tell you that never happened. Anyway, we’d been paying for them for a handful of months without even realizing it (because I was in denial and never studied the bills).

So I canceled the premium channels, bringing our bill down to $158 a month. And then I started preparing to dump cable all together. It took a little research and a few purchases but here’s how we did it. (Some affiliate links may follow. Thanks for supporting this blog!)

1. We switched our home phone service (our cellphones do not get reliable service at our house so we need to keep a “landline”) from the cable company to Vonage. They had a Black Friday sale for a year of service for $9.99/month (although after taxes and fees that goes up to about $18), plus a $100 Amazon gift card (a similar offer is available now with a $100 Visa card) and $24 cash back through Ebates. That took our phone service down to $92 for the year (including taxes, including the gift card and cash back). We were paying $28 a month getting our phone service from cable. Net savings for the next year: $244.

2. Because the ability to record shows and have a guide (the thing that shows you what’s playing when) is important to us, we ordered a Tivo Roamio OTA. I learned that most Tivos require a monthly service fee of about $15. That wasn’t going to fly. The point of this exercise was to save money (and stop giving it to the evil cable company). The Roamio OTA only works with an over-the-air antenna (so it will never work with cable like other Tivos) but has no monthly fee. The upfront cost can be high, about $400. Fortunately Black Friday came through again. Tivo had a sale on refurbished Roamia OTAs with 500 gigabytes of storage (about 75 high definition shows) for $200 and I picked one up at that price. I found this 1-terabyte version for $314. The Roamio also allows us to access Netflix, Amazon Prime, HBO Now and other streaming sites. We have an Apple TV that we use for some of that, but we wouldn’t need that with the Tivo.

3. We bought an antenna. Thankfully television antennas have come a long way since the giant metal things you used to see on people’s rooftops. As far as I can tell, you should choose an antenna based on the distance from the signal and the amount of interference. Although we’re only about 35 miles from the towers where most of our signals originate, we’re in a rural-ish area with a lot of trees, so we got one with a 60-mile range. In general the longer the range, the bigger the antenna but it’s still no big deal, and certainly nothing like the enormous metal pokey-looking antennas of my youth that were on top of every house. We mounted it on the pergola near where the cable line come in the house under the deck and ran the coaxial cable in the same hole. The antenna cost $100.

We get 57 channels with the antenna and, as you might the imagine, the vast majority are garbage, but there are a solid 20 channels with some value including several PBS channels we never saw through cable.

4. We’re taking advantage of streaming services. If you’re considering cutting the cord you may want to also consider sharing with family or friends. (I think this is all legit, but if it is bending the rules a little, let’s call this a theoretical conversation.) You could, for instance, pick up the tab for Amazon Prime and your streaming buddy could pay for Netflix and you could share. I’m shocked by how much I’m finding on Amazon Prime (here’s a 30-day free trial) that I’m really enjoying. (I highly recommend “Mozart in the Jungle.”) We’ve always had these services but never really used them much.

5. We did keep our broadband Internet service from the cable company, but I argued with them to extend the promotional price that is supposedly only offered to new customers. This was not easy to accomplish (nothing is, when it comes to the cable company) but we’re getting the super high speed Internet (50mbps) for $65/month. We might have been able to slow down to 30mbps but since I knew we’d be doing more streaming I thought we better leave it at the higher level.

After all that we took our bill from $190 a month a few months ago to $83 a month (broadband internet and Vonage phone service), a savings of $107 a month. We spent $300 on equipment (antenna and Tivo) to make the switch, so in less than three months we’ll have recouped the “startup” costs, and by the end of the year we’ll save $984 (and that doesn’t include the $100 Amazon gift card from the Vonage deal). Honestly, it’s not huge money, but when you look at it as money that just doesn’t need to be spent it is a nice chunk of change. Save it for two years and it’s a pretty decent vacation (or two trips to a really good nursery).

So how’s it going? Pretty darn well. Yes, I miss some shows. I would really love to watch this season of “Top Chef” but I can’t. And you know what? I’m living. I don’t miss it enough to justify that huge cable bill. The hardest parts for me have been cracking my HGTV addiction (although some shows are available on the HGTV app even without a cable provider) and not having access to streaming live television on my iPad. We’ve used our iPads as second televisions for awhile now, and until we got rid of cable I would watch morning news shows while I was getting ready in the morning. That’s no longer an option and that’s been a difficult change.

One unexpected benefit has been the improved picture quality. Believe it or not, we get a much better high definition picture through the antenna than we did through cable. I read somewhere that the cable signal can degrade (for various reasons that I don’t know enough about to repeat), and apparently ours did because the difference is astonishing. The day before we cancelled the cable service, we had both cable and the antenna coming in to the television, so we could flip back and forth between the two to the same channel and it was clear the image was much crisper with the antenna.

I don’t think cutting the cord would be as simple for a family that watches a lot of sports. Our sports watching is mostly limited to the Packers and the Badgers and I couldn’t watch my Badgers win the Cotton Bowl, which was a drag. But it’s a good excuse to go to a bar for a game or, um, drop in on a friend. We will probably add on a few months of HBO Now for $15 a month when some of our favorite shows come back on there, but that’s easy to turn on and turn off as we need it.

Everyone cord-cutter I consulted with before we did this told me they had no regrets, other than not doing it sooner. If you’re on the fence, what I would suggest is just saving some money in the interim and calling your cable company and asking them to look at your package. Better yet, tell them you want to cancel. There is a ridiculous cat-and-mouse game that you have to play with the cable company, but in the process of trying to cancel our service they offered me increasingly better deals. Deals that were good enough that if we hadn’t already been full committed to cutting the cord I might have stayed after all. But I’m glad we didn’t. We’re watching less television in general (this is a very good thing, in my mind) and we’re saving money. And honestly, it felt so good to tell the cable company that we no longer required their television services.

Have you thought about cutting the cable cord? Or if you’ve done it already, are you happy with the decision?

cable cutting the cord television
by Erin @ The Impatient Gardener
15 Comments
previous post: THE SUN SETS ON 2016
next post: A BASEMENT BEFORE TO MAKE YOU CRINGE