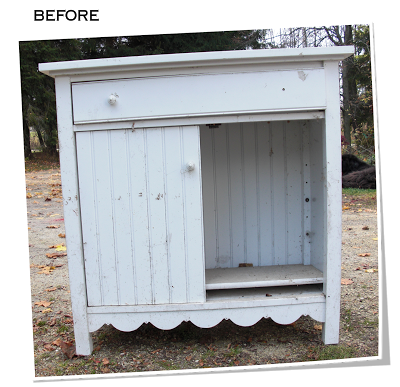 So here’s the story. About three years ago I saw a note on Freecycle about a Crate & Barrel buffet up for grabs. I hopped right on that and picked it up. It was one of those assemble yourself pieces and obviously not a lot of care had been taken in assembling it. On top of that, one of the drawer pulls was broken off, a door had fallen off and its back was separating from its front. I dragged it home and stuck it in the garage.

And that’s exactly where it proceeded to live for the next three years. In fact I routinely ran into it with my car when I wasn’t paying attention (don’t laugh, I also once tried to back up with the garage door still closed, so anything is possible).

About a month ago we were enjoying an unseasonably beautiful day and I was sanding some furniture outside (the subject of another upcoming before and after). Things were going so well that I thought it was high time to pull out that buffet and see if it was salvageable. So I gave it a good sanding (down to the MDF), removed the one door that was still attached, and set to work recreating it as a bookcase. 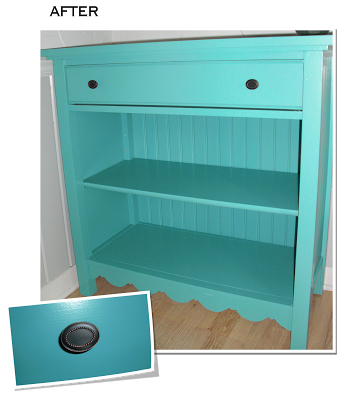 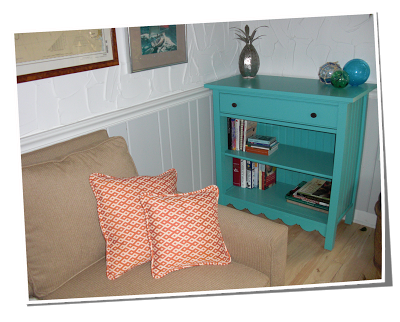 It took me two tries on the color. First I used Benjamin Moore Waterfall, but it was sort of a bad baby blue, so I did the second coat (after first priming with an oil-based primer) with BM Peacock. I snagged a couple of aged copper drawer pulls from the local True Value, and now it’s a nice accent in our office/den-type room, which I plan to do with accents of turquoise and orange.

My husband, who is a perfectionist when it comes to painting (and particularly varnishing), was nice enough to point out that it had a couple of “holidays” (apparently that’s what drips are called because you were obviously on a “holiday” while painting, or something like that), but I think I can handle that, especially since I know have a colorful bookcase instead of a ramming board for my car.

before and after furniture
by Erin @ The Impatient Gardener
13 Comments
previous post: A beach treasure
next post: Great Cyber Monday deals