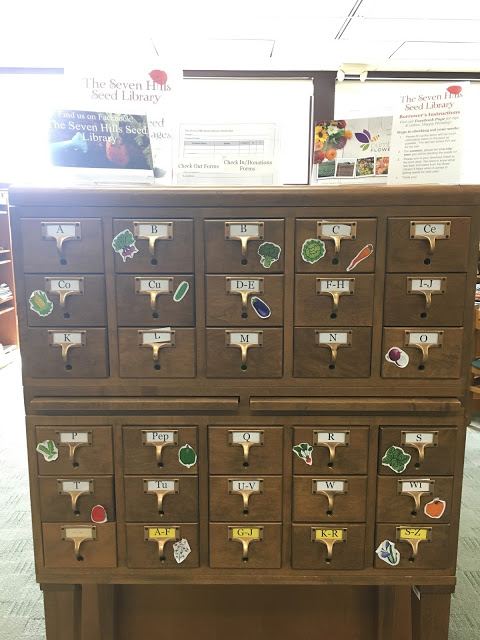 Well I made it through the first post-Labor Day week. This summer has been so incredible (I know, I won’t shut up about it, sorry) that I was truly melancholy Monday just thinking of it ending. Despite my best efforts, my thoughts have turned to gardening tasks that need to be attended to before frost and suddenly I’m feeling concerned I won’t get it all done. 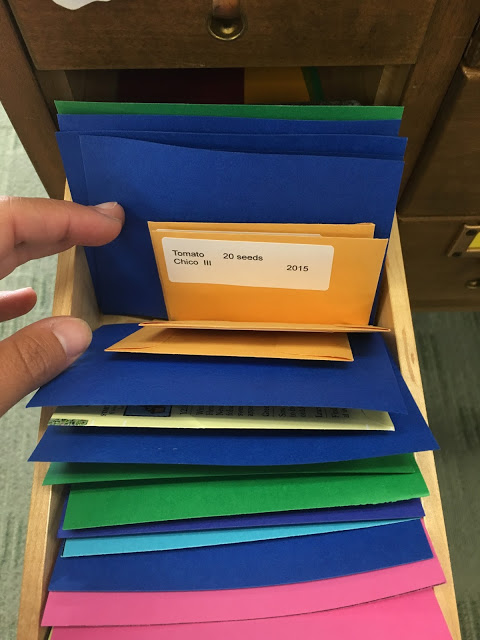 I spent some time this week at the local library doing some research for work and I was thrilled to see a real, live card catalog. I bet the library gets offers to buy it on a regular basis, but this one is serving a great purpose: It’s a seed library. I’d known it was there, but I hadn’t checked it before and I was thrilled to see such a great variety of heirloom seeds represented in it. Seeds are packaged and free to take. They ask that you bring back some seeds at the end of the season  to keep the collection intact and hopefully add to it. Here’s more info on seed libraries.

The Kitchn is doing a series called “20 Chefs, 20 Knives” and I find it really interesting. I’ll admit, I was a knife snob. When we got married I didn’t register for a knife set, choosing instead an expensive  German chef’s knife and paring knife (which I still have an use regularly). Then I got a Wusthof santoku knife that has been in regular service for about eight years. And then I read a Chef’s Illustrated knife review and picked up their favorite, the Victorinox Fibrox 8-inch chef’s knife (affiliate link), about a year and a half ago and it’s the knife I use 98% of the time now. I like it so much that even if it’s dirty I will take it out of the dishwasher and hand wash it rather than use another knife. When I bought it, it was $35 and I see that it’s now $10 more, but it’s still a fantastic deal over most really good knives. I also got a new knife sharpener and it’s the best I’ve used. You just have to know the angle of your blade, which they clearly describe how to figure out in the instructions.

This list is actually quite funny and somewhat spot on. But only go there if you have a sense of humor about your name.

Here’s some good info on how to clean marble, complete with lots of drool-worthy photos of great marble, natch.

This reminds me, I never did get Mr. Much More Patient to build a trellis for the clematis by the garage.

I’m a little afraid of canning. I fear I will kill someone with a horrible foodborne illness caused by an improper seal or whatever. Here’s a bunch of ways to preserve food without going the full-on canning route.

That’s it for this week. I’ll be spending some time in the garden doing a variety of things including using Miller High Life for it’s highest and best purpose: slug bait. The slimy suckers are everywhere. What’s on your list for the weekend?