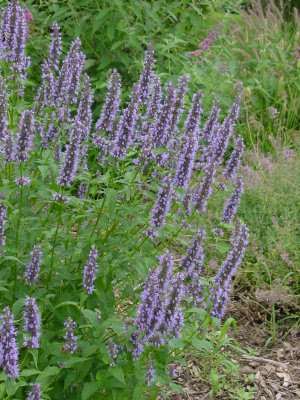 Last Saturday I attended a garden seminar (I just love going to garden seminars and shows in late winter; it is so fun to dream) where Richard Hawke, the plant evaluation manager for the Chicago Botanic Garden was the keynote speaker. I’ve gone to a lot of seminars, speeches, talks, etc. for work and pleasure, and Hawke was one of the better presenters I’ve heard. And best of all he gave the kind of gardening presentation I like best.

See, mostly I just want people to tell me what to plant and why and then show me pictures of how pretty it is. And that’s what Hawke did.

Hawke, whose name you might recognize if you’re a Fine Gardening magazine reader because he’s been writing a few stories for them about the plants he likes best from the botanic garden trials, shared a list of “four-star” plants that have done particularly well in trials.

Originally the Chicago Botantic Garden tested plants for winter hardiness and nothing else, but these days they are looking for four things: cultural adaptability to the soil and environment of the test site, winter hardiness, disease and pest resistance, and ornamental and habit traits. They allow a minimum of four years for evaluation and offer almost no care other than watering as needed and mulching (for water conservation as Hawke says he is convinced that mulch provides no protection from weeds). They don’t fertilize, stake or protect from critters (in most cases). They deadhead only to see how plants respond to it.

The idea is that they are testing plants for the average homeowner, not the average gardener, because so many people stick plants in the ground and never touch them again other than to water them on occasion. So gardeners who are more attentive to their plants might find even better results.

So that’s how the trials work. And here’s part of the list of plants Hawke considers to be “four-star” plants (it’s quite long, so I’m picking some of the plants I found to be most interesting). Remember, these trials were done in Chicago so it generally applies to zone 5 or so and climate such as you’d find in the Midwest. I’ll put my comments on each plant in italics.

Agastache ‘Black Adder’ (hyssop) Zone 5-8; Full sun
Lavender flowers with purple blue calyces give the 7-inch long inflorescence a darker appearance; 48″ tall and wide; robust, bushy habit and long-blooming. This Agastache does not produce seedlings so it is easier to manage than many others that seed like crazy.

Aruncus ‘Misty Lace’ (Goat’s beard) Zone 3-7; Full sun to partial shade
White flowers, in plumes to 14″ long, blooms in late May to mid-June. 25″ tall by 30″ wide. The flowers on this goat’s beard make up half the height of the plant which is why I’m intrigued by it even though I already have another goat’s beard in my garden. It kind of looks like a giant astilbe, but with sparser plumes.

Baptisia ‘Midnight’ Midnight Prairieblues (false indigo) Zone 4-8; Full sun
Deep blue violet flowers to 24″ long, blooms in late spring to early summer and reblooms on secondary branches. 42-48″ tall by 54″ wide. This was introduced in conjunction with the CBG and I grow it in my own garden. It is so much nicer than the regular Baptisia and it’s one of those plants that lasts forever. As with all Baptisias, pick a spot carefully and keep it there because they don’t like to be moved.

Echinacea ‘Milkshake’ (coneflower) Zone 5-8; Full sun
Double creamy white flowers, 3″ wide flowers blooming in mid-June to September. 30″ tall by 24″ wide; stiff stems and a bushy habit. I love all the new Echinaceas, but I’ve had horrible luck with them. None have lasted more than a couple years. I’m sure I’ve spent hundreds of dollars in Echinaceas that are now nowhere to be found my garden. Hawke says that while originally people were breeding for color, now they are looking for longevity, so I’m going to try ‘Milkshake.’ The general rule of thumb that the CBG has found is that if a coneflower goes into winter without basal growth (leaf growth from low on the stem), it’s probably not going to be around come spring. If it does have basal growth, it will probably be fine.

Eupatorium ‘Phantom’ (Joe pye weed) Zones 4-8; Full sun
Pale purple pink flowers, clusters to 7″ wide, in late July to mid-August; 48″ tall and wide with dark red/purple stems. Small bushy habit but taller than the promoted 36″ inches tall. Mildew resistant. I have both ‘Phantom’ and ‘Little Joe’ starred on my list from Hawke and it’s really a horse apiece as to which I liked better. This one is less well known than ‘Little Joe’ but they are both lovely.

Nepeta racemosa ‘Joanna Reed’ (catmint) Zones 4-8; Full sun
Lavender blue flowers from mid-May to October, 24″ tall by 48″ wide. I love nepetas and Hawke says this one is “always in bloom.” It is very rounded in a habit, like a blue-flecked meatball. That’s my analogy, not Hawke’s. That’s probably why he gets paid to do this stuff and I don’t.

Rodgersia aesculifolia (fingerleaf rodgersia) Zones 5-7; Light to full shade
Palmate leaves with 5 to 9 leaflets; creamy white flowrs in large clusters to 24″ long in late spring to midsummer; 36-72″ tall and 48-72″ wide, rhizomatous habit. Why am I not growing this plant? I need to be growing this plant. It has enormous leaves that offer that tropical look that is so hard to find lower than zone 8 or 9.


Syneilesis acontifolia (shredded umbrella plant) Zone 5-8; Light to full shade
Pale pink disk florets on stems to 42″ tall in midsummer. Foliage mound is 18-24″ tall by 24″ wide. Dissected leaves to 12″ wide, slowly spreads by rhizomes; moist soils best but adaptable to dry soils. This is another great foliage plant and a “must have” for my garden.


For more on the Chicago Botanic Garden’s plant trials including reports on many of their trials, go to www.chicagobotanic.org/plantevaluation