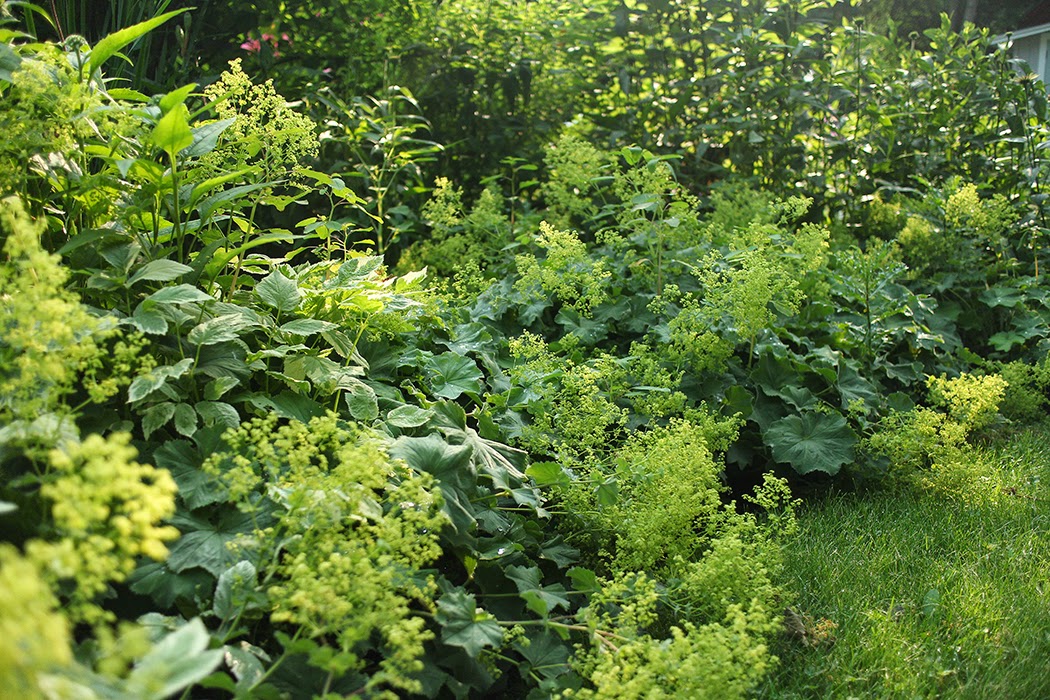 I have had a lot of favorite/top posts in the works and was planning to run them over the course of a week, but this is my 600th post on this blog so I thought it should be something a bit meatier, and today I’m bringing you five perennials I wouldn’t be without.

These are plants that are complete no-brainers for me and I can’t fathom having a garden without them. Most of them are low maintenance and therefore play an important role in my zone 5b garden.

1. LADY’S MANTLE (ALCHEMILLA MOLLIS)
My adoration for this plant know no bounds. It has a lovely scalloped round leaf and a very clumpy habit, so even when it has put on a lot of growth it tends to stay in a tight ball. The leaves are slightly fuzzy so critters don’t bother it. In early summer it sends up shoots of tiny chartreuse flowers that last for months, although they tend to flop over. The flowers are wonderful in flower arrangements but equally as nice in the garden where they add an ethereal shot of light. 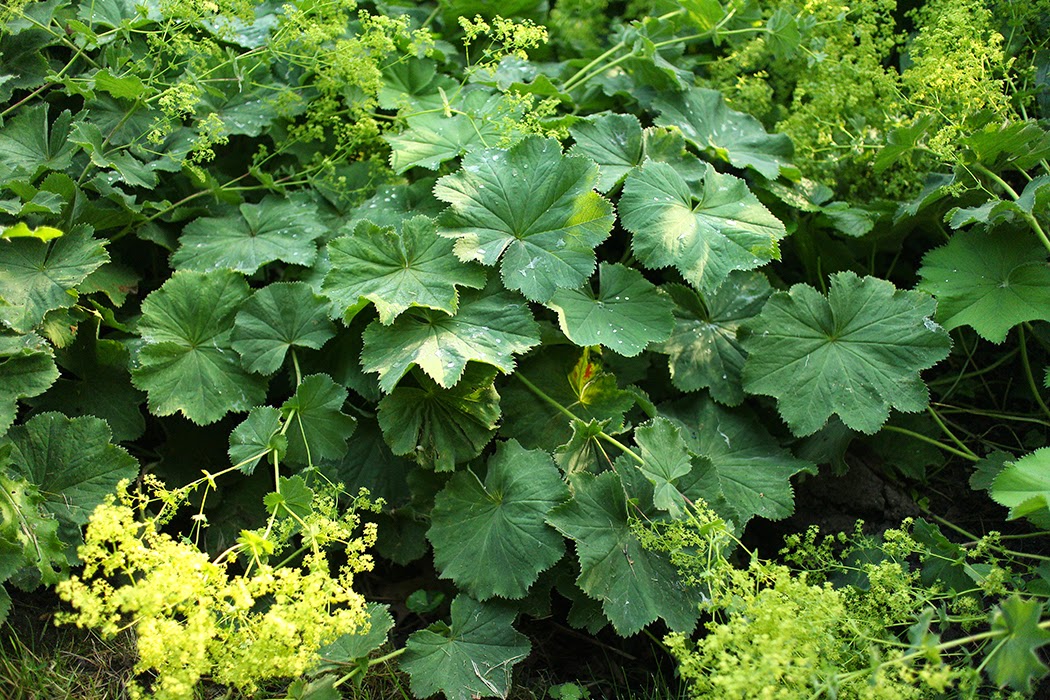 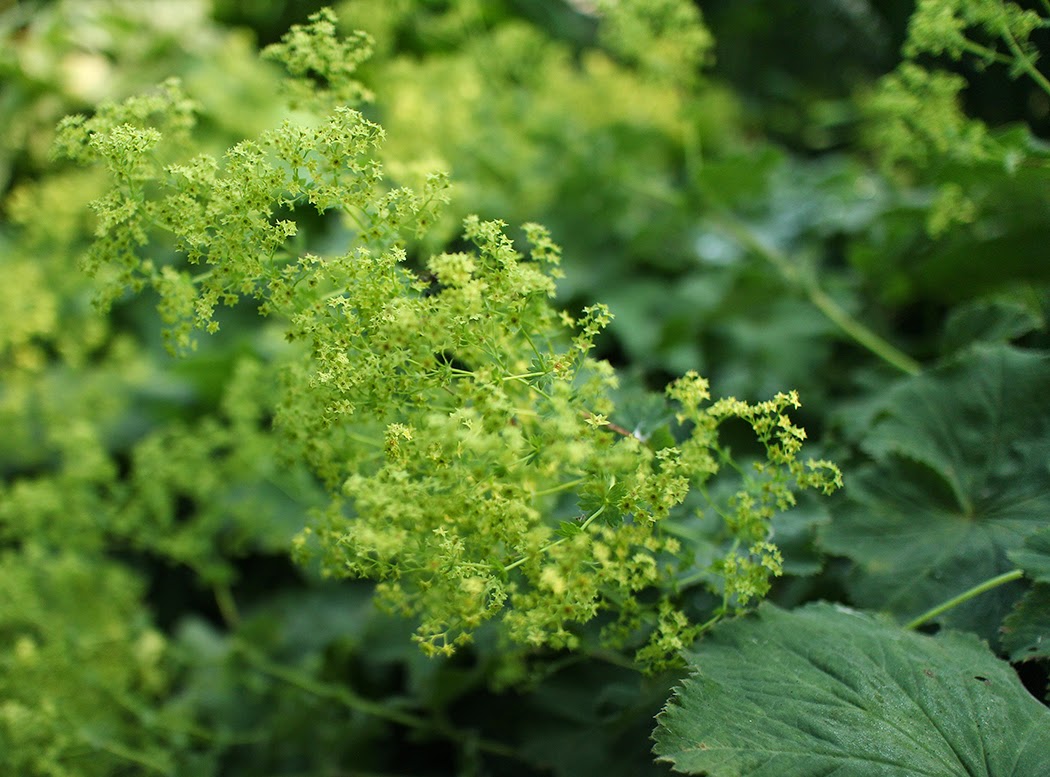 In my garden, Lady’s Mantle grows equally well in full sun and part shade, although the flowers seem to last a little longer in shadier spots. It couldn’t be easier to divide, something I have done at almost any time of the spring and summer. It will also seed itself sometimes, but in my garden it does this only in the nicest possible way and is not at all overbearing.

The past couple of years, I have added a dwarf version of the plant to my garden (Alchemilla enrthropoda). It doesn’t flower nearly as well, but its leaves are utterly charming and perfect for the very front of a border.

Nepeta, aka Catmint, is a true workhorse in the garden, especially for someone like me who can’t get enough of anything with a blue(ish) flower. There are oodles of varieties out there and my preference is for those that don’t seed themselves everywhere. Walker’s Low became quite popular a few years ago and I quite like it, although it is not a small version as the name would suggest. 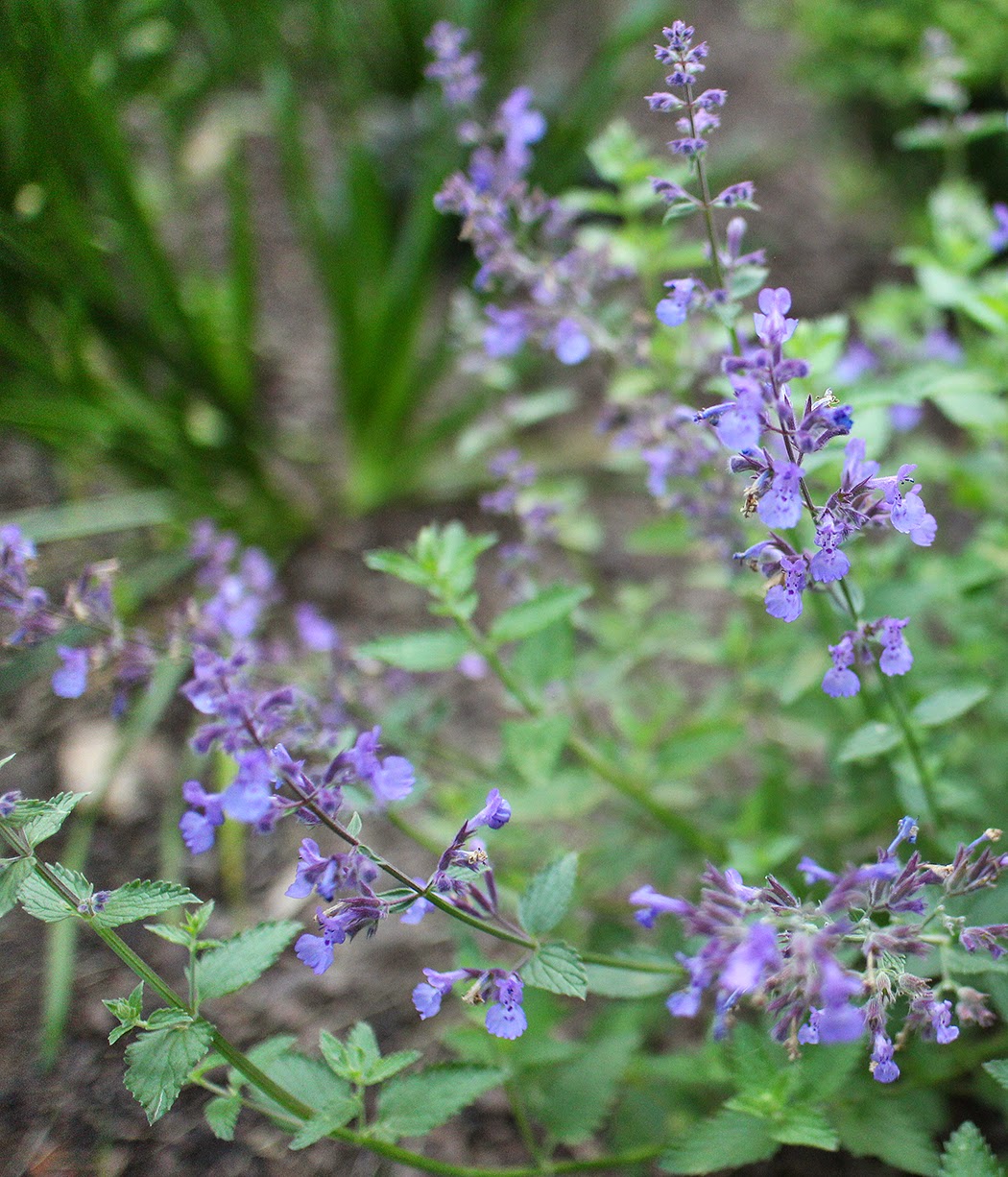 I line my path with Nepeta, sort of a poor man’s substitute for lavender (which I’ve had no luck with in the past). When it gets too floppy I cut it all back to about 6 inches off the ground and it regrows and reblooms in about a month. Last summer I got three full rounds of blooming.

It’s another plant that no critter will eat and the bees adore it. I also love the smell of it, making it an even better selection for the path, where you may brush against it. I’ve also dotted it liberally around the garden where it has a tendency to flop a bit and intermingle with its neighbors, usually creating a lovely look.

Given my recent complaining about how I have almost no intact hostas left this year, thanks to an aggressive deer and slug population, you might be surprised to find this stalwart on my list. Unlike the previous two plants, I’ll admit, hostas have some drawbacks. But there’s a reason that there are people out there who call themselves hostaholics; who have thousands of different cultivars in their back yards. Hostas provide an important texture that few other hardy plants can. With all the bitsy plants with minute leaves, there are precious few that can juxtapose them, and hosta does it better than almost any other. They can have an almost tropical feel to them. 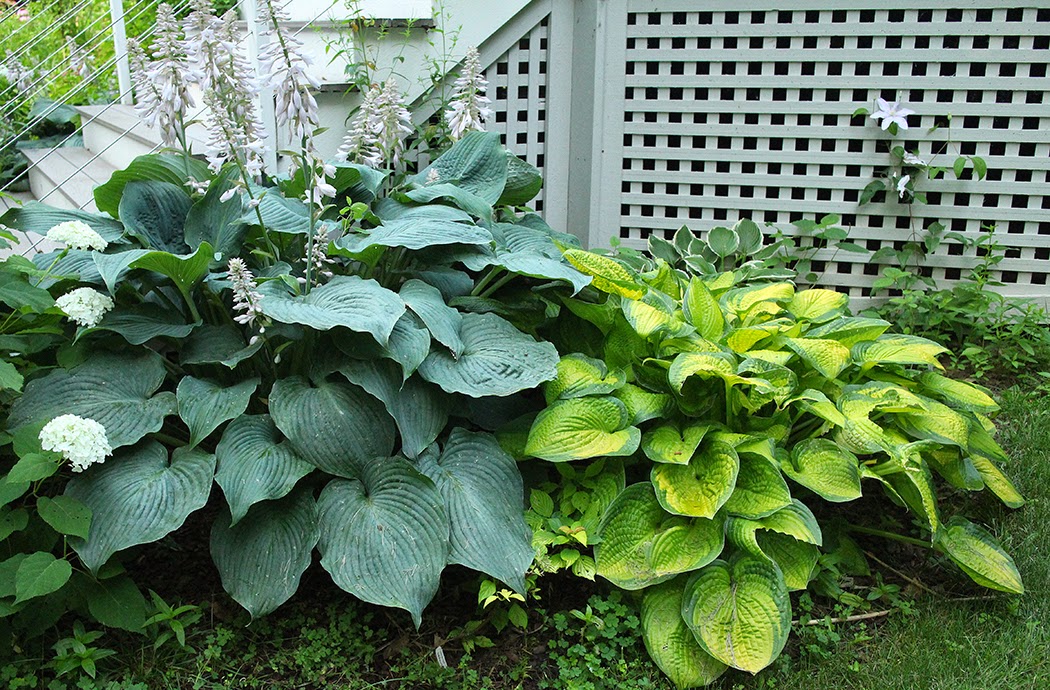 Of course hostas come in just about every shape, size and color (white, yellow, green and blue and everything in between) you can imagine, so it’s easy to understand how you could quickly fill a garden with them. 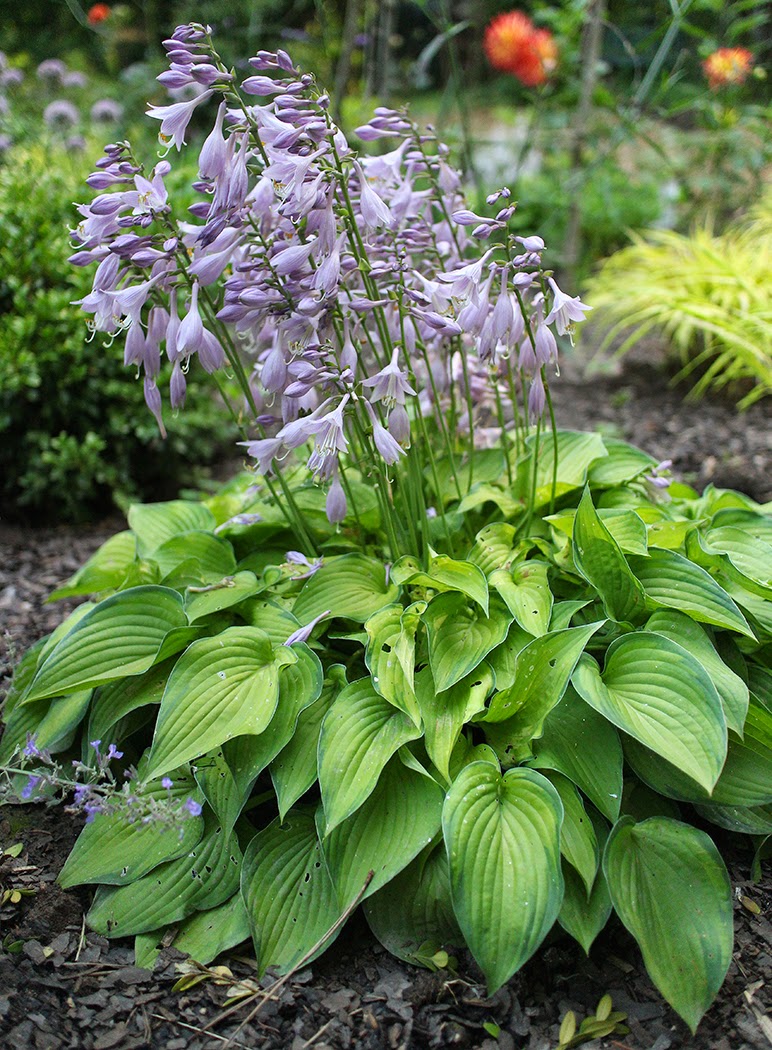 In my zone, you can find a hosta to grow almost anywhere, including full sun. Some (usually yellows) do better than others in sunnier spots and you probably need to water them more, but I’m always amazed at how tough hostas can be.

I’m throwing this vine in this group purely because I have become somewhat obsessed with them. These are nowhere near as carefree as the other plants on this list, but I don’t think they are as high maintenance as most people think they are. If you plant them right to begin with—deeply in a hole filled with good stuff including compost, well-rotted manure and a touch of bone meal—water it well and mulch them to keep the roots from frying, all you really have to do the rest of the year is a little pruning and throw on a bit of fertilizer (I use Espoma’s Rosetone). 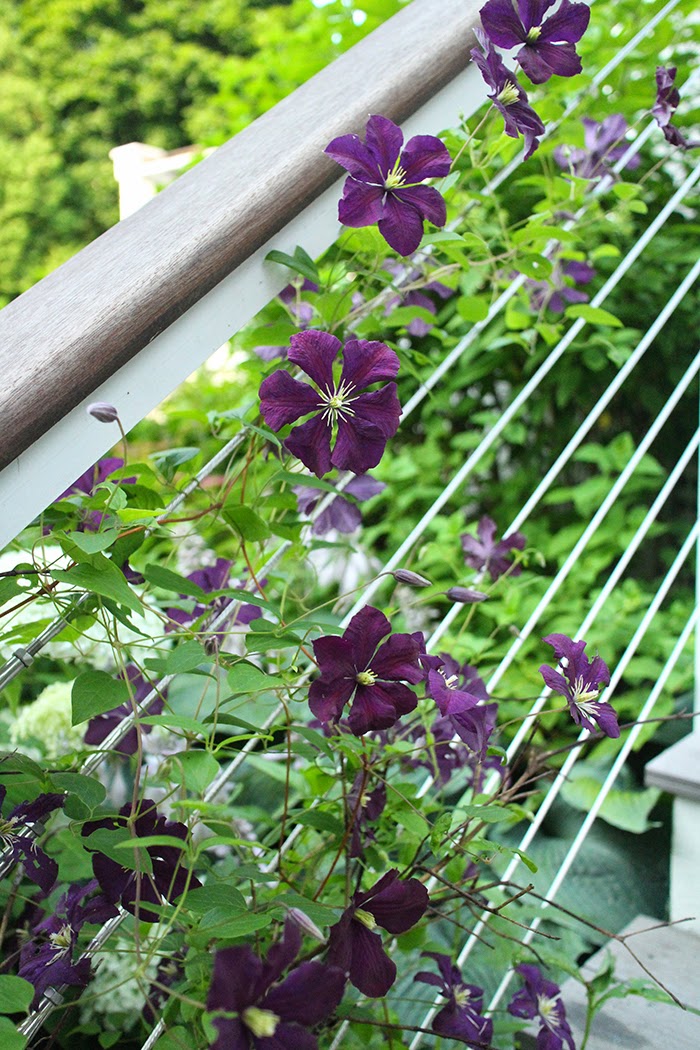 Although I love, and have fallen for over and over again, the large group 2 clematis with their showy flowers, these require more work than the others. The smaller flowers in group 3 are utterly charming when they work their way through a shrub or tree and and are so easy to care for: just cut them back to one or two buds in very early spring. 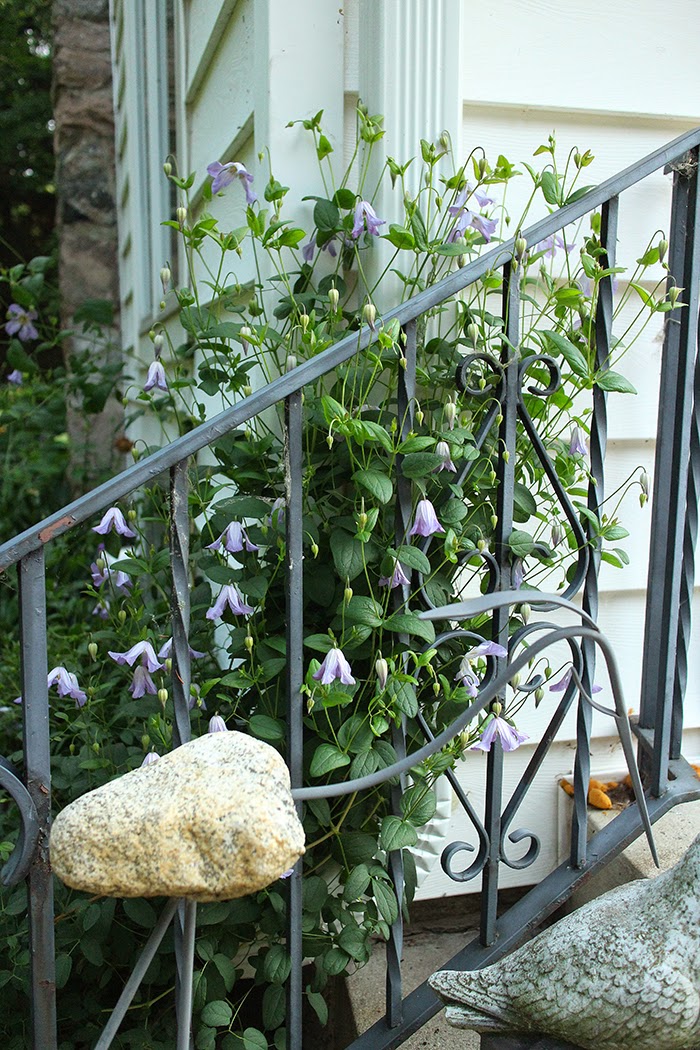 Awhile ago, I figured out that you don’t need a trellis to grow clematis. I now grow them up shrubs and trees, on standalone obelisk-type things (sometimes just a group of skinny tree branches), sprawling on the ground, and up the deck railings. I like it when they go a little wild.

Originally I thought I would choose ornamental grasses for this last slot, but that is a pretty broad category, so to narrow it down I’m going with Hakonechloa (Japenese forest grass). It grows in shady spots where most other grasses won’t even think about going, but it will tolerate a fair bit of sun as well. With a lovely arching habit it has a way of softening the edge of a border. And it looks great with hostas because of the contrast in foliage types.

My favorite is ‘All Gold’, but I also grow ‘Stripe it Rich’, ‘Beni Kaze’, and ‘Aureola’ (all of which look very similar to me).

What perennials would you never be without? Did any of mine make your list?

clematis favorite perennials hakonechloa hosta Lady's mantle nepeta perennials
by Erin @ The Impatient Gardener
4 Comments
previous post: CHALLENGE ACCEPTED (aka CAN I BRING FREE PLANTS BACK TO LIFE?)
next post: CHECKING IN ON THIS SUMMER’S CONTAINERS