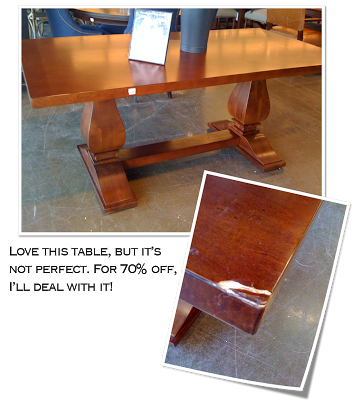 I use the word reveal with hesitation because I’ve seen full on kitchen re-dos and this isn’t one of those … it just took about as much time as one.

It started in October with the hunt for a table, and I found it at the Restoration Hardware outlet last October.

Then came the banquette. 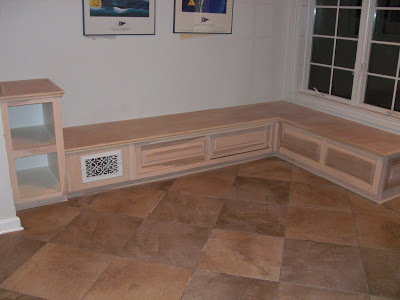 Then came the ugly “Which white paint?” period that is so boring it barely needs mentioning here. Suffice to say, I finally made a decision and got on with painting … a lot of painting. Oh heck, let’s just get to the before and afters! We did everything except build the banquette and sew the seat cushions ourselves.

Except there’s just one problem: I didn’t take any “real” befores. The main problem with the eating portion of the kitchen (our only eating area in the house) was that the round table extended into the room, so when you walked into the back door, you immediately walked right into the table. 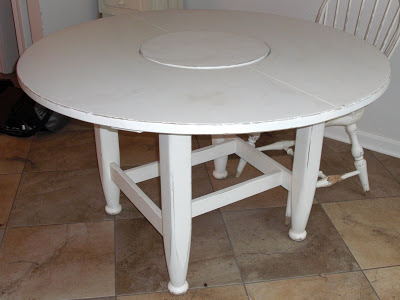 And here’s the new table and banquette (I used the same chairs from the old set). 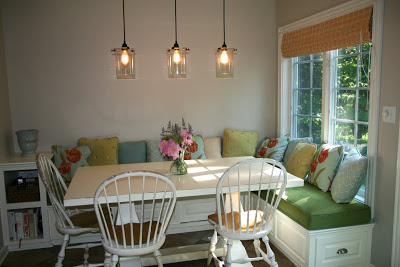 Opposite the table was a coat tree (that collected way too many coats and a bookshelf overflowing with cookbooks and anything else I couldn’t find a spot to stick somewhere else. 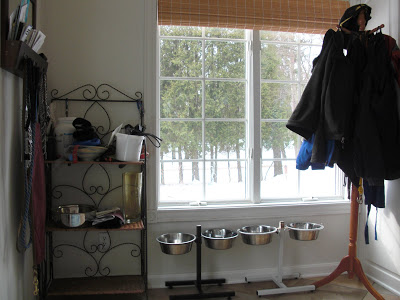 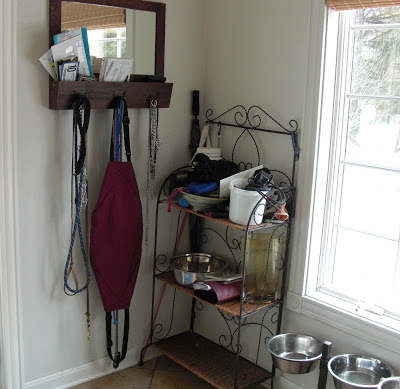 And now it’s clutter free (ahhhhh) and still plenty functional. The cookbooks have all gone into all the storage built in to the banquette. If you want to read more about making this mini coat area, click here. 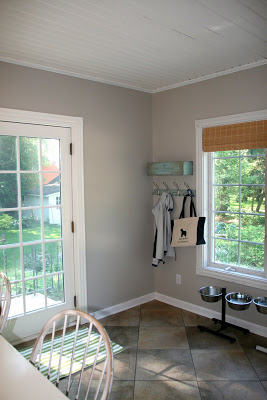 Since buying this house eight years ago, we’ve been slowly chipping away at kitchen projects, replacing the appliances, lighting and flooring.

Here’s a shot of the other side of the kitchen before we put down our “dirt-colored” tile (a must with two huge dogs traipsing in and out all day). 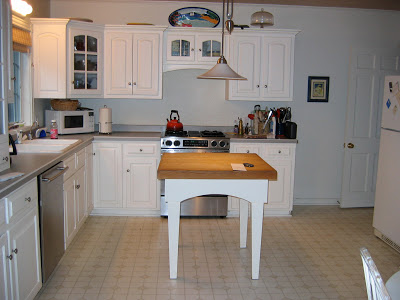 And here it is today (OK, you can’t see much of the floor because of the two enormous furballs taking up most of the space, but what a difference a coat of paint makes, don’t you think?): 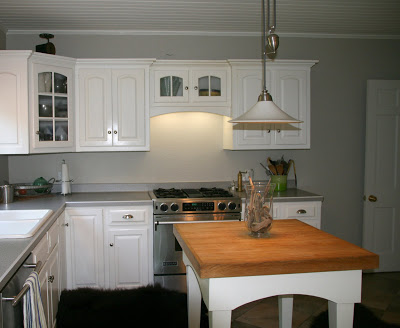 Let’s talk about ugly lighting fixtures for a second, shall we? I hated this light fixture from the moment I walked in this house and it’s finally gone! 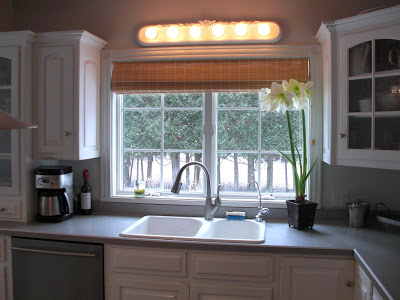 Much better, don’t you think? 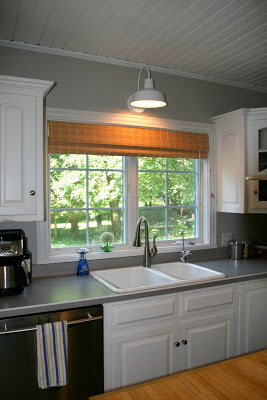 The worst part of the kitchen project, BY FAR, was painting the ceiling. I had to cut in on each individual board, priming with BIN primer (stinky, awful stuff that’s impossible to clean up, but it also seals knots, which you can see we had a lot of), then painting. I had no idea how bad that part of the project would be and I think in the future I’d pay a painter to do the ceiling. 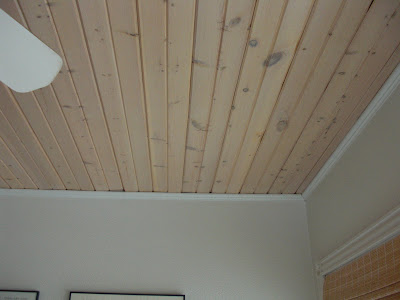 And here’s what it looks like painted (along with a close look at the lights over the table. You can see one of the blades of the ugly ceiling fan that was previously on that side of the room in the before picture.) 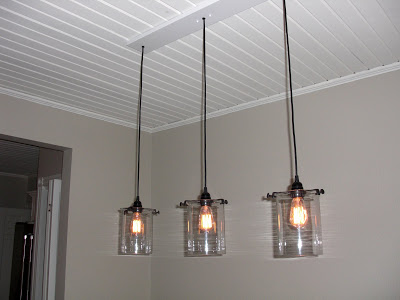 One of the benefits of taking so long on this project is that I had time to attend to some of the smaller details that I just love. This doormat is one of them. Since this is the primary entrance to our house, a lot of dirt is tracked in. I was putting a fresh rug every few days before. Then I found this cute striped rug that happens to perfectly match with the new colors in the room at Garnet Hill. The best thing about it is that it’s an outdoor rug made with polyproplene. Once a week I rinse it off with the garden hose, let it dry, and it’s good as new. Plus it doesn’t slide around and it lies flat, so it never bunches up under the door like some other rugs tend to do. 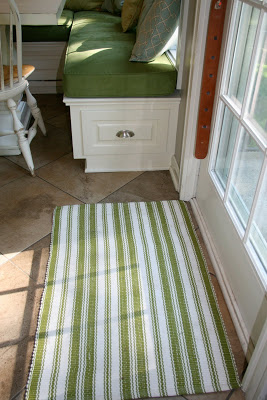 Like most rooms, the kitchen isn’t really finished. The kitchen cabinets need painting (Benjamin Moore’s Mascarpone is the chosen white, in case you were curious. It’s the color on the banquette, the table, the ceiling, and the door. I haven’t gotten around to changing all the trim over to it yet). I desire new Caesarstone counters, but really, our laminate counters aren’t all that bad looking and they are in great shape, so it’s difficult to justify that expense, and the room is screaming for a backsplash. I also need some art for the wall behind the banquette. All in due time.

For now, I’m quite satisfied with this: 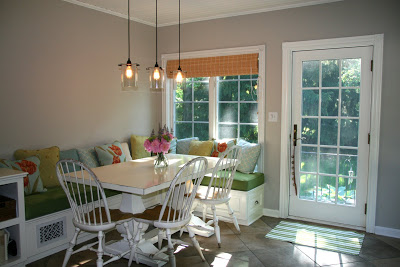 In coming weeks I’ll talk in a little more detail about a few of the projects in this room including moving the lighting, customizing the table and more. If you want to read about parts of the project I’ve already blogged about, go here, here or here.