I’ve been so excited about the garden tour I had planned for the weekend. An expansive garden, just minutes from my house, was open as part of the Garden Conservancy’s Open Days program. The 120-acre property known as Afterglow Farm was established in 1929 by the Uihlein (pronounced Eee-line) family. (You can read more about the garden in this great article in the local newspaper).
Much of the property is naturalized, with wide paths leading around large ponds, past charming pump houses and off to the far reaches of land. What I found most interesting was that most of the planted areas by the main house relied on what I consider to be “old standards” and often natives. So often when you tour a garden it is full of hard-to-find cultivars that are interesting partly because they are so unique. But this garden used wide swaths of classic plants.
But here’s where the clandestine part came in. As I was walking up the path to enter the garden with my SLR, a volunteer stopped me to tell me no photographs were allowed. Why, I cannot imagine, especially since several photos of the garden appeared in the newspaper and on various websites, but whatever. So I put the SLR back in the car and started doing a lot pretending to be text messaging on my phone while sneaking photos (there were volunteers everywhere busting people for taking pictures). So that explains why the pictures stink, which is really too bad, but hopefully you can still get a feel for this great garden. 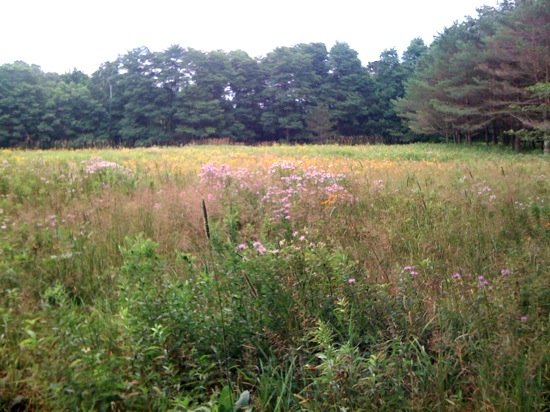 A winding path that goes past several ponds opens onto this prairie, full of native plants. 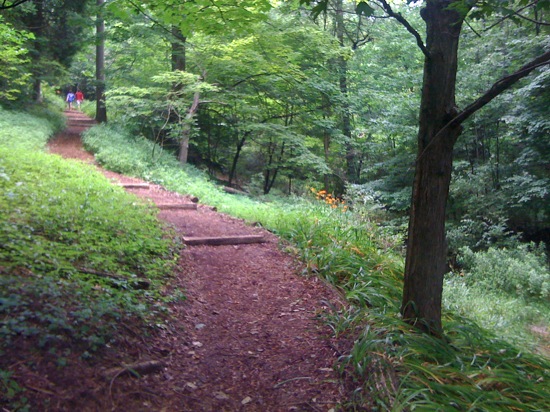 The path from the beach (the property is on Lake Michigan) borders a beautiful ravine. 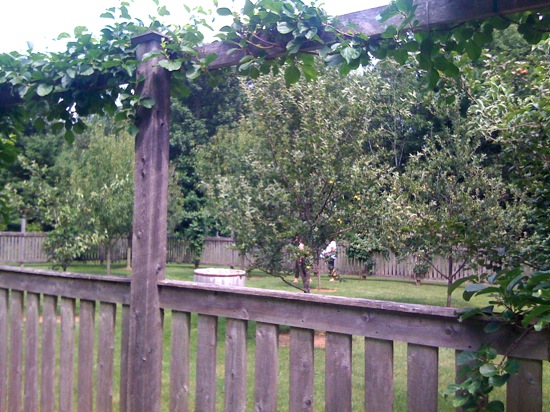 An orchard is enclosed by a fence on which vines grow. This is probably one of the most formal parts of the garden. 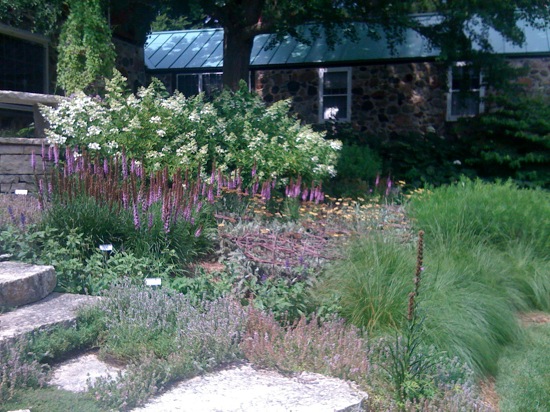 Hydrangeas, blue fescue, creeping thyme and more are combined in the planting on the back side of the house. 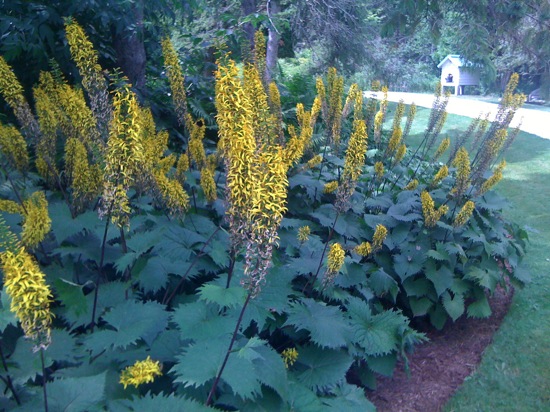 Ligularia ‘The Rocket’ is always a stunner, but it is even more eye-catching when planted en masse. 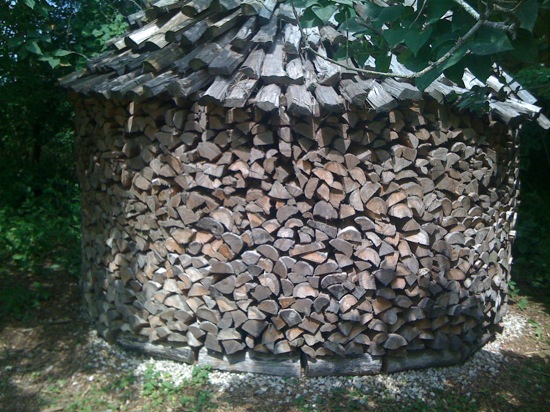 At first I thought this was a little well house or something, but it turns out it’s just a very creative way to stack firewood. I’d hate to be the one who pulled out the wrong piece of wood though. 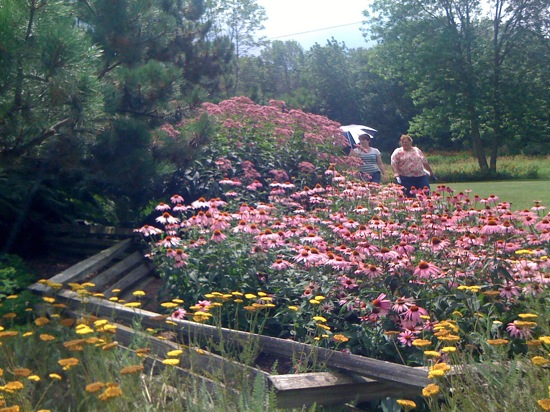 Purple coneflowers and Eupatorium are a simple but absolutely lovely combination. 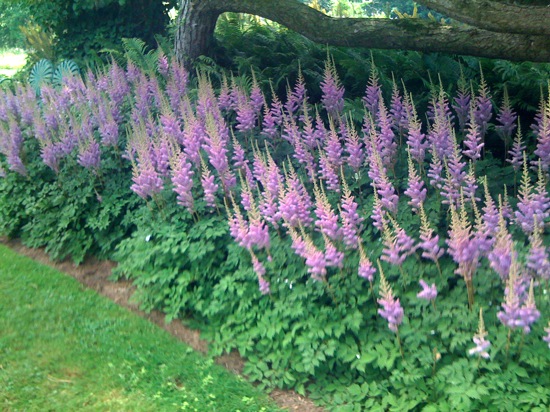 Why don’t I grow astilbes? 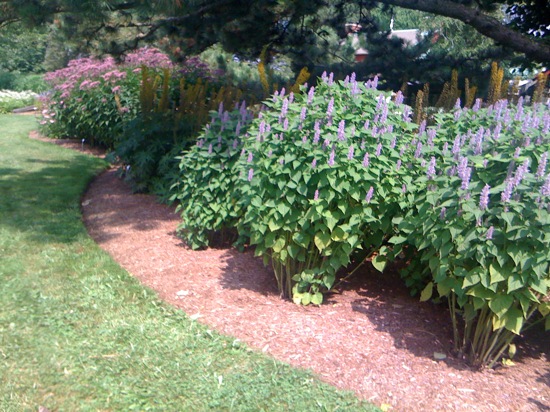 And why in the wold don’t I have any Anise hyssop in my garden? This photo shows how meticulously the beds were edged. I’ve always said that nothing cleans up a garden more than a fresh edge. This one was amazing and very uniform, and obviously done by some kind of power tool. Anybody know what that might be? Because whatever it costs I think it’s worth it. 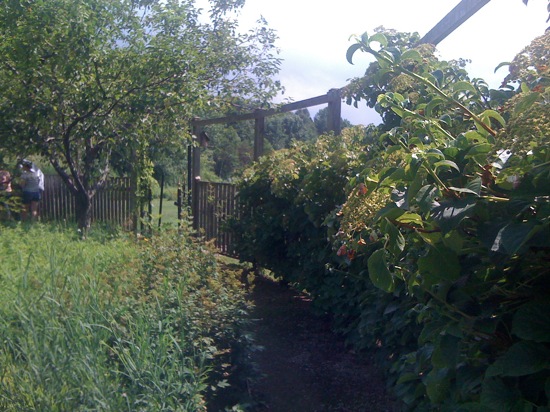 The showpiece of the property is a large circle garden enclosed by a fence covered in climbing hydrangea and full of small paths. A fountain stands in the middle. 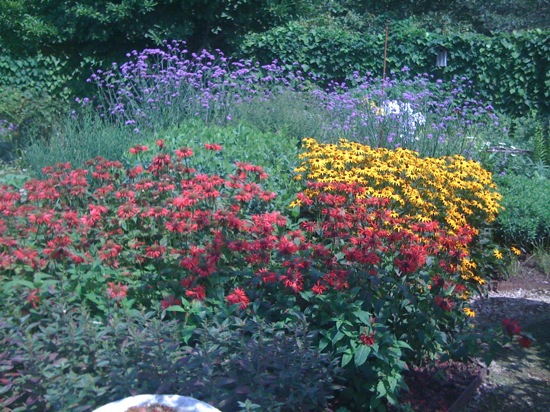 Black-eyed Susans and Monarda: more classics that look great together. 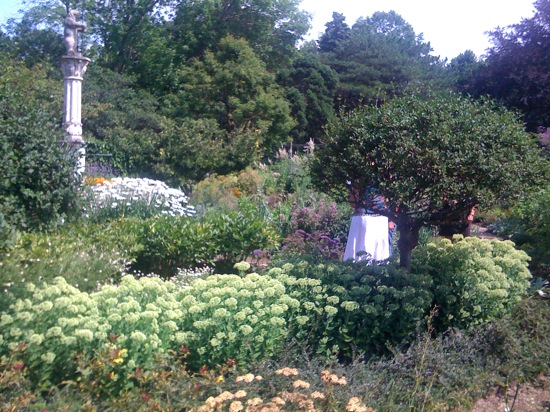 There was a little bit of everything in the circle garden, from herbs, to natives, to sedums and standards. You can see the top of the fountain on the left side of the photo. 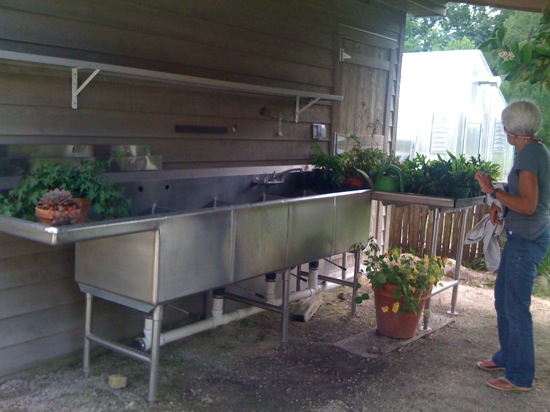 Potting bench/area of my dreams.

Want to see more garden crashes? Check out this one and this one.