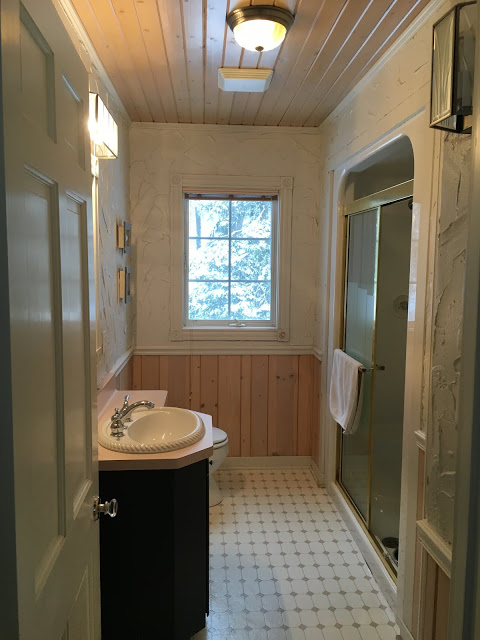 This downstairs bathroom renovation is becoming an interesting project. Little hurdles are popping up—nothing earth-shattering or more than the usual renovation snafus, but odd—but it looks like it’s going to happen. Soonish.

Since I’ve blabbed on about it for a bit now, I thought I’d share with you some of the vision for what the room looks like. You’ll notice on the photo below that there are no lights. That’s because, just as I was ready to order from an Etsy shop, the store just flat out disappeared. I’m not sure what’s going on with that, but maybe I dodged a bullet there. Also, the shower pan showed up on a semi on Tuesday but it was cracked so it had to be sent back. Like I said: Little stuff, but weird.

Just to refresh your memory about what this horrific bathroom looks like, here it is in all its bad early-90s glory. You can probably understand why we declared it “the first room that had to be fixed” when we bought the house 13 years ago. This room has it all: pink countertop (I painted the vanity a couple years ago to improve on the pickled finish), lemon meringue pie wall texture, peeling vinyl flooring, cavelike shower with gold sliding door and, of course, a boob light. Other than the doors, nothing in this room is staying.

It’s certainly not the worst bathroom that has ever existed, but it’s up there. I should add that there is a grossness factor as well. That thick wall texture collects dust and what I think is mildew and the wainscoting was never painted. The ceiling is also pickled pink.

Let’s not linger on that image for long. Here’s the plan. 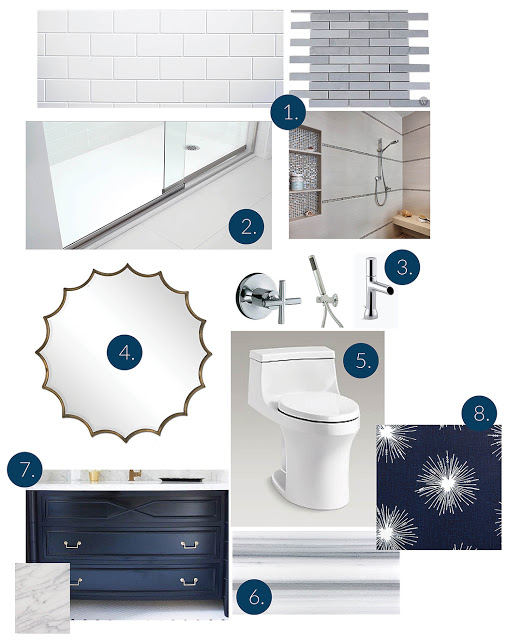 If you are rolling your eyes at the fact that I seem to have designed yet another gray, white and navy room, I can’t help it. The heart wants what the heart wants. Plus, the only navy things in the room are the vanity and the roman shade, both of which could easily be changed down the road, and almost any other accent color will go with the rest of the gray and white color scheme in the room.
The shower will be opened up to the ceiling, where the subway tile will run all the way up and over. The rest of the ceiling will be painted wood planks to match the kitchen ceiling and the hallway outside. We might be able to reuse what is there, but we’ll relocated the fan to the shower. I haven’t decided what the shower door will be yet, but it will be some kind of glass. Although I prefer completely frameless, I’m not sure we have enough room to have a door opening into the room so it may have to be a sliding door.
Lots of decisions left to make, but until the sledgehammer falls, I’ve got time to figure out the details.
bathroom mood board renovation
by Erin @ The Impatient Gardener
6 Comments
previous post: A GUIDE TO THE BEST GIFT GUIDES
next post: UNSEASONABLE WEATHER LEADS TO GARDENER’S GUILT