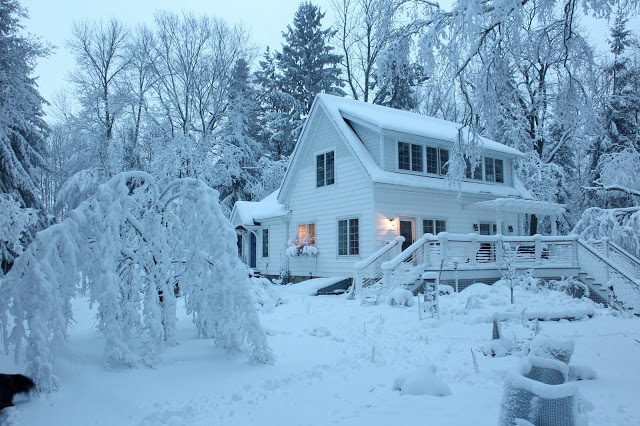 Last week Tuesday we got a dumping of snow the likes of which we’ve not seen for years around here.   It wasn’t so much the quantity—a healthy 12 inches at least, but probably more like 14 or 15—but the water content of what fell. I read somewhere that it had 30% more water than the average snowfall, thanks to the storm system picking up massive amounts of moisture from Lake Michigan.

All that heavy snow wreaked havoc on the yard. The trees were laden with snow, bowing under its immense weight.

I’ve heard plenty of times that it’s not good to shake the snow off trees (I believe that’s because the branches can be brittle and break when they snap back up), but it was clearly a salvage mission out there. The Serviceberry tree, which stands at good 20 or 25 feet tall was reduced to a 6-foot-tall mound, all its branches bending over. The new arborvitaes planted last year had all flopped over, laying almost flat in the snow. The main branch on an older birch that we hang the bird feeders on drooped so low the bird feeders were laying on the ground.

The cedar trees, though, sustained the worst of the damage. We have precious few cedars left on our property as they are difficult to grow because they are the favorite treat of deer and therefore are stripped bare of all foliage 7 feet off the ground and lower. They do line our driveway and we have a lovely mature cedar outside the living room window that provides an excellent screen from the neighbors and the road. We also have a few more the east edge of our property that screen us from the neighbor in that direction.

Every cedar lost branches. We actually had to cut branches along the driveway just so our neighbor who plows for us could clear the driveway. The ones to the east were a huge mess. And the great cedar outside the living room lost two branches, causing the remaining tree to list toward the house, at one point making it so heavy with snow that it rested on the roof.

We spent all weekend clearing fallen branches and took six overflowing truckloads of branches away. Lumberjacking is exhausting work! 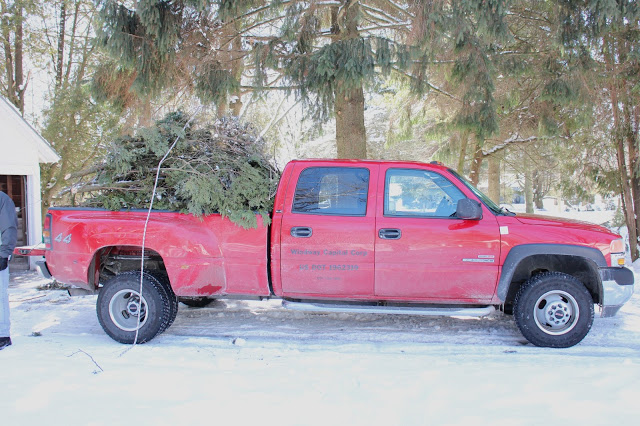 Most trees recover pretty well once the snow falls off them and the remaining part of that cedar did pop back up a little, but it’s clear that losing two more main branches (we had cut one damaged one off that balanced it in the other direction several years ago) was the death nail. It’s no longer safe.

The ancient birch tree that the bird feeders were on needs to go as well. We knew that was coming when we were hanging Christmas lights on it and discovered that the entire thing is mostly hollow and dead.

And then there is the great birch to the east. It is a stately tree that I look at from our bedroom windows in every season. I’ve noticed over the last couple years that the branches seem to be getting closer and closer to the bedroom windows. It is a lovely tree to set the hammock under and relax in summer. Occasionally we find huge dead branches from it fallen on the lawn. It’s not healthy.

Birch trees have a life span of about 50 years here and I have to think this tree is at least that. This has been wearing on us lately, and last week when I laid in bed listening to the branches break outside (I heard the big cedar branch come down with a huge crack), I couldn’t sleep for fear that I’d wake up with that birch tree in my bed. I guess when you start not being able to sleep because you’re worried about a tree falling on your house, it is, perhaps, time to do something about that tree.

We will be incredibly sad to see it go, which is why we’ve put off what we knew was inevitable for at least three years now.

Any doubts we had about our decision to have the tree removed by a professional when the snow melts a little (but before the ground thaws to minimize damage to the yard), were tempered when we saw the huge birch that fell in our next door neighbor’s yard during the snowstorm. Our houses were built within a year of each other and we have reason to believe the trees were planted at about the same time too.

Our neighborhood is called Cedar Beach, but with all the damage to the cedars in the neighborhood, I’m starting to think someday the “cedar” part of Cedar Beach won’t make much sense.

cedar garden serviceberry snow tree
by Erin @ The Impatient Gardener
4 Comments
previous post: Who’s doing what on the kitchen renovation
next post: Oh how I love a great garden path