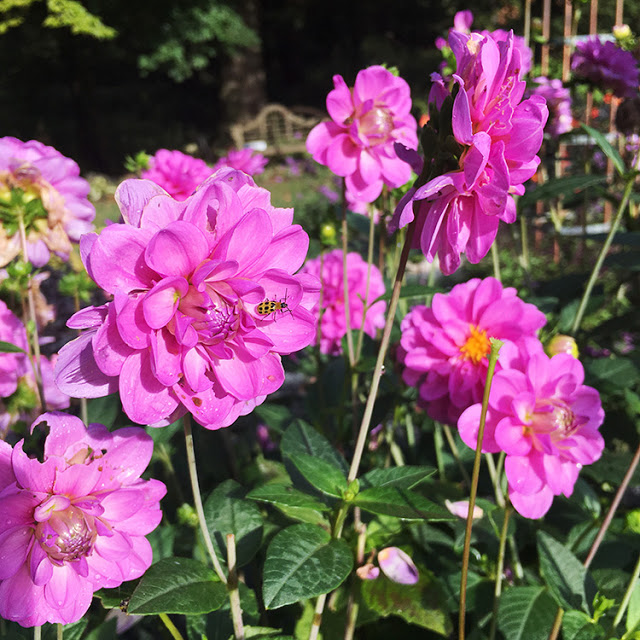 There is a school of thought, which I wholeheartedly subscribe to, that the activities we enjoy for a lifetime are those that are difficult to master and that constantly have us striving to know more, or perform better. There’s no doubt in my mind that gardening falls under this category. But if I were so blazen as to start thinking I know it all, you can be sure that Mother Nature would put me firmly back in my place.
No year in the garden is the same as another. And suddenly, almost out of the blue, I find myself facing a new garden menace that I’ve never found to be a threat before.

A little over a week ago, I posted this photo of my ‘Serkan’ dahlias looking great on Instagram. One commenter remarked on the cute bug and wanted to know if it was eating the dahlias. My reply was that there’s clearly evidence of something munching, but I didn’t think it was an issue.
Let me tell you: It’s an issue.
Here’s another ‘Serkan’ just a few days later. 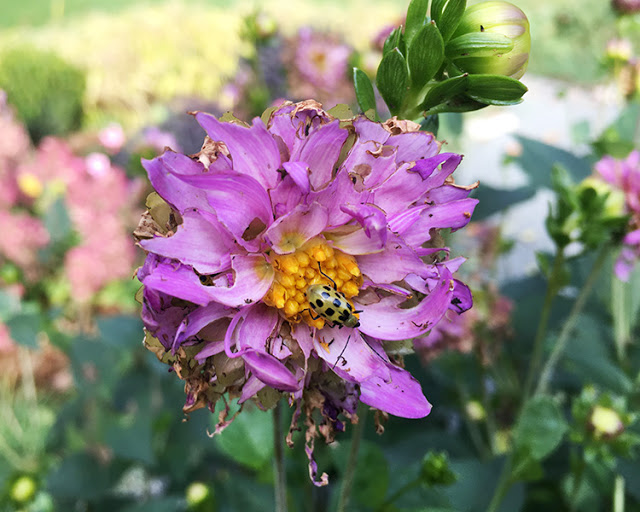 The bug is a spotted cucumber beetle and I’ve certainly seen them before, but I’ve never witnessed them either in such quantity or be so damaging.
When I walk near these dahlias—and it’s odd because so far they’ve only done this kind of damage on these dahlias, not the dozen or so other varieties that grow nearby—hundreds, if not thousands, fly up as I interrupt their feeding frenzy. 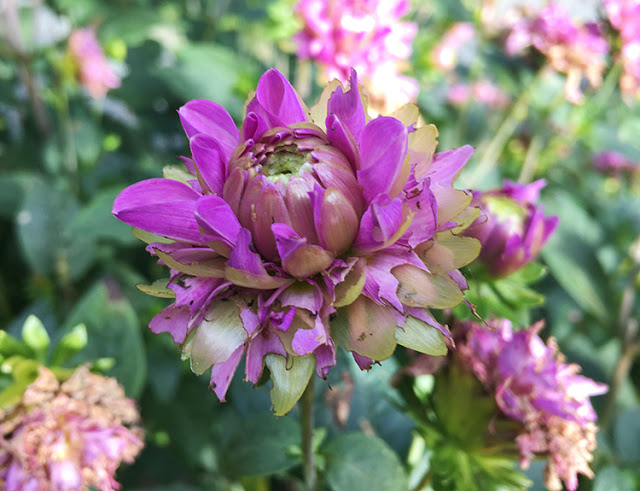 Of course my first thought was, “What the heck are cucumber beetles doing eating my dahlias?” particularly when my cucumbers seem to be unaffected.

After doing a little digging, it appears that they don’t have a problem eating flowers and can be found on the flowers of many ornamental plants. Why this picked this dahlia to harass, I have no idea.

There is some good news. Spotted cucumber beetles (unlike their trendy striped cousins) do not overwinter here. Apparently the adults fly up from the south in mid-summer, lay their eggs in weedy or grassy areas where the larvae hang out until it gets dry and then they fly off to terrorize gardens. We’ve had a very wet summer until the past very dry few weeks, so the timing seems to make sense.

In terms of controlling them, none of the options seem particularly useful or helpful. Handpicking is mentioned as an option, and I have no problem with that as I’ve been squishing sawfly larvae and handpicking Japanese beetles all summer, but I just don’t get how that works when the things fly away as soon as I get close. Putting out sticky insect-catching tape by itself or lining the inside of a plastic cup (I knew Red Solo cups would make their way into gardens soon enough, as they seem to have infiltrated every other aspect of society) and perching it upside down on a stake are also said to be options for catching them.

Everything else involves pretty nasty non-selective insecticides that I’m not interested in using in my garden.

To be honest, there’s not much chance of saving these dahlias at this point. I could cut them back and maybe get one more bloom out of them if I could get rid of the beetles, but so far that seems unlikely. Soon enough the beetles will either die or move on, and hopefully not in my yard, and the problem will solve itself.

Just one more new challenge in the garden.

dahlias
by Erin @ The Impatient Gardener
8 Comments
previous post: THE BEST PLANTS IN THE EARLY FALL GARDEN
next post: ENJOY YOUR GARDEN PATH & THE INEVITABLE MAINTENANCE