I want a laundry room that looks like this:

But that is not the laundry room I have, and as long as we live in this house (which we anticipate will be forever unless we win the lottery), it will never be.

We used to have a first-floor laundry “room.” It was in the middle of the kitchen. It had to go because I’m never really done doing laundry and having clothes hanging around the kitchen is weird and a little gross. So we moved the laundry to the basement and created a pantry.

The unfinished part of the basement, which is where we put the laundry because that’s where it made sense to put it from a plumbing and electrical standpoint, is rather dungeonlike.

So instead of what you see above, this is what our laundry “room” looks like, well at least until a month ago or so.

Now that’s what they call putting it all out there. Since we are perpetually doing laundry, we adopted the “pile” method of sorting. After the one millionth time of tripping over a pile of laundry (tripping is one of the more frustrating things you can do, I’ve realized), I declared that something had to be done.

So I had Mr. Much More Patient do a little building. I told him I wanted one set of four laundry-basket sized cubes, and one set of two. And I told him to build them as cheaply as possible. If there ever was a project that qualified as putting lipstick on a pig, this is it.

He built my cubes out of oriented strand board which doesn’t look or paint up as nice as MDF but apparently it is considerably cheaper. He had all the cuts made at Home Depot to keep things simple. Then he set them on a frame of 2×4 to get them off the ground a little bit, and I trimmed out the face with some 1x2s.

Then I hit it all with the sander, just to smooth things out a little and raided the paint closet for primer and paint. Lipstick for the pig, you know.

The four-plex got a couple coats of a chartreuse I picked up in the mistint section of the hardware store awhile ago, but then I thought that was, well, too much, so I put a thick stripe of a peacock color (BM Waterfall) in the middle. That turned out to be relatively pointless because you can’t see it with the laundry baskets in there.

Each cubby gets its own laundry basket for clean laundry, one each for me, Mr. MMP, towels/bed linens and miscellaneous stuff like dog towels and rags. That way you just take the entire basket to where it needs to go to be put away and it is already pre-sorted (and Mr. MMP has no excuses not to put his laundry away). I had him make the cubbies quite tall so the laundry baskets are easy to get out even when they are really full. 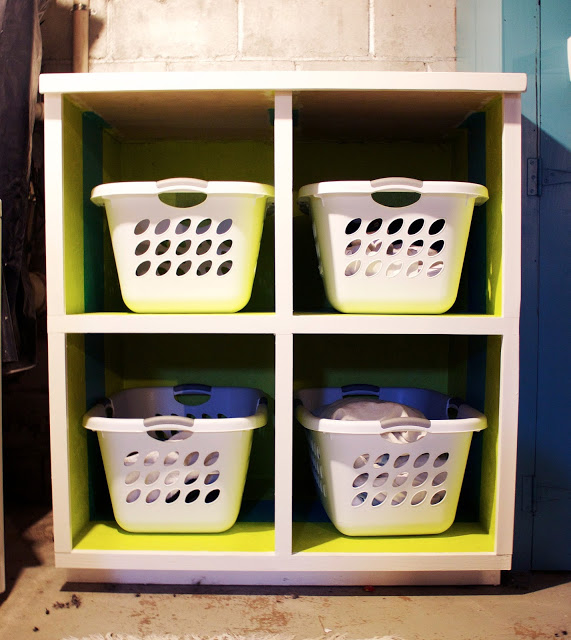 In the two-plex tower, I painted the inside a mix of all the blues I had left. Most of them were colors I tried to paint the new bathroom, but a few other projects were thrown in there too. I even threw in every sample pot I had laying around that was any shade of blue. I bet I got rid of at least six cans of paint during this project. It felt great. 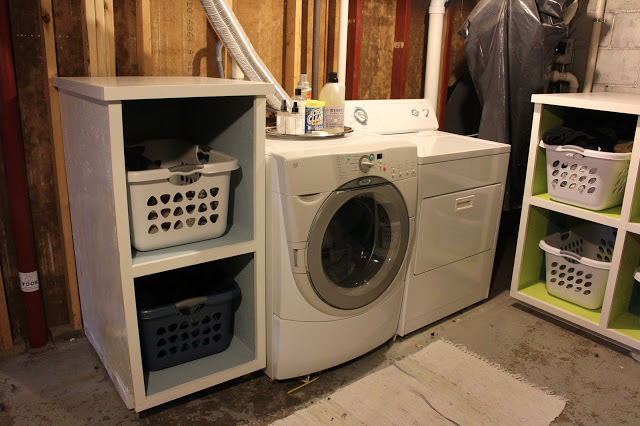 Each of those cubbies gets a basket as well and those are both for dirty laundry. Originally I said that the dark basket was for darks and the white basket was for lights, but who am I kidding, I’m just happy if it gets in any basket.

The new system is working so well. I haven’t had a pile of laundry stacked on a table or on top of the machines, or dirty laundry piled up on the floor since we put it there.

There is even a space for all the laundry products on a silver platter. So fancy! Actually this is one of several aluminum platters I have that my mother-in-law has given to us with a note that says, “You never know when you’ll need a platter.” Turns out she was right. Oh yeah, now we’re talkin’ swanky.

I’d love to find a cute, brightly colored rug for the space and maybe even something crazy like an actual light fixture instead of the bare bulb (getting wild now!).

So there’s my lipstick. What do you think? It might not be the most beautiful laundry room, but it’s at least tolerable now.

Make sure to check back later today for the low-down on some of my laundry room essentials.

basement laundry
by Erin @ The Impatient Gardener
18 Comments
previous post: You know you’re a gardener when …
next post: My laundry room essentials