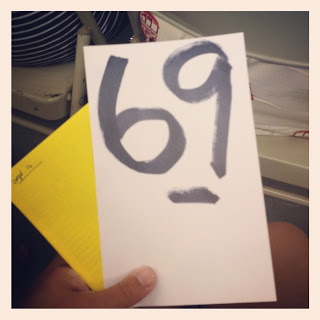 I went to an auction Sunday. For FIVE hours. I had no idea auctions lasted so long (I left before it was over). Normally giving up almost an entire Sunday to stand in an dank old building would be akin to torture but I did it anyway because:

1. Some of the items being auctioned off were my godmother’s and I wanted to have a small piece of her.
2. It was raining. All day.
3. There is a snake (or possibly thousands of snakes) in my garden. This means I cannot garden. I saw the little bugger Friday night slithering on the edge of the driveway where it meets the garden. It was approximately 1 foot long and a half-inch or less in diameter. It was a garter snake. I ran (flew?) to the highest point I could find, which happened to be up the front steps to the landing by the front door. And then I stood there for a good 10 minutes debating how I was going to get inside given that the front door was locked and I was obviously going to have to go to snake level to get back into the house. During that time I realized that yes, perhaps it was ridiculous to be cowering from an itty bitty snake, but I also realized that if it was that small, it’s probably a baby. Which means mom and dad are probably lurking nearby, along with thousands of brothers and sisters. I know garter snakes are “harmless” but I can say with authority that my nephew was bitten by one when he stuck his hand in a kayak with one in it (see why I like paddleboarding more than kayaking?) and also it’s not so much the threat of death that bothers me about snakes but just the general slithery bits.

So anyway, I ended up at this auction with my sister-in-law. It was really sad seeing the belongings of a person I loved being auctioned off, but I understand that her family had to find a way to get rid of some of her things. Still I got a little emotional and I’m sure it was a bit weird that there was a girl crying in the back row of the auction for a couple minutes. And that kind of emotion can be a bad thing at an auction.

Fortunately both my sister-in-law and I were pretty restrained about buying things. I don’t want to become one of those people on “Hoarders” who is drowning under a pile of dead people’s belongings because they can’t bear to let go of that person’s stuff. So my goal was just get pick up a couple things to remind me of Mary and not to buy anything I didn’t have a purpose for. The bad news is that I did not succeed. The good news is that at least I didn’t buy anything big that I don’t have a purpose for.

I got this vintage soda bottle cooler. When I was bidding on it I actually thought it was a milk box, but a person at the auction told me it was actually for soda bottles and I now see that the holes for the bottles would be too small for milk bottles. I haven’t been able to find any information on the internet about it, but I think it’s pretty cute. I paid $30. 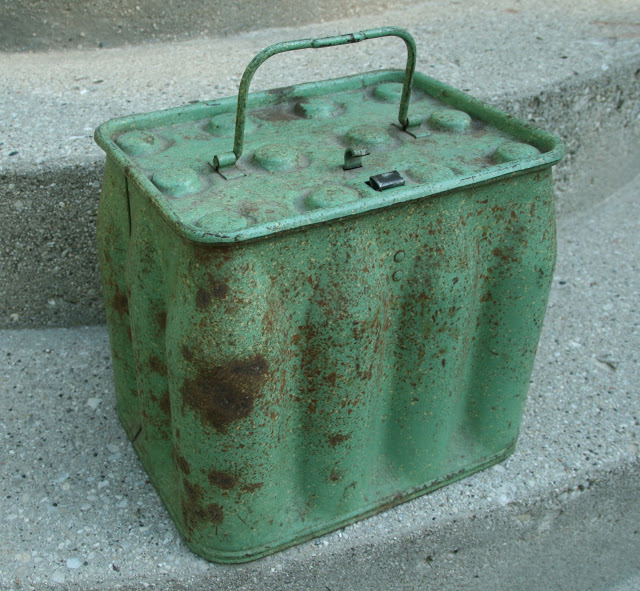 I missed out on a really cute side table. It was two-tiered with a spiral spindle going up the middle and would have been really cute painted out. I stopped bidding at $12 and I think it went for $15. I’m kicking myself for missing out on that one.

And that’s probably what led to my next purchase, in which I can only assume that my mind was taken over by some sort of alien auction mind sucker. But basically I saw this little stool (the auctioneer described it as a piano bench, but my mom tells me it was probably an organ bench) and knew it had to be ancient. The upholstery is obviously in really bad shape but it’s incredibly sturdy. There is a chip out of the veneer in one spot but otherwise the wood is in good shape. I truly have no idea what I’ll do with this. I paid $10. 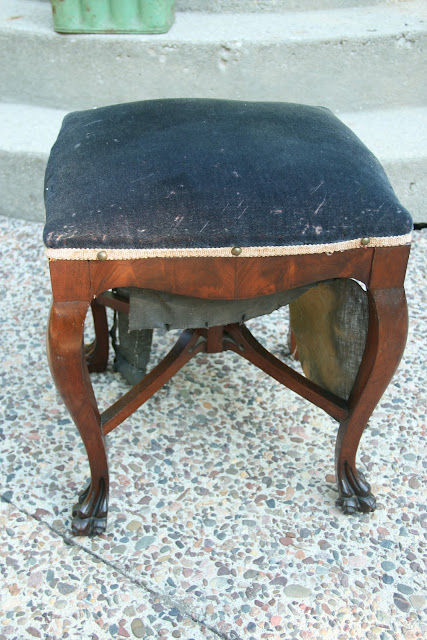 I also missed out on the coolest little parts box (and I failed to take a picture of it). It was very old (I’m sure it was my godmother’s father’s, since she inherited their house) and had the cutest little drawers that were all filled with goodies. I stopped bidding on it at $120. I realize now that I should have asked the person bidding against me if he wanted what was in the drawers or the box itself because I would have gladly given him the contents if he would have stopped bidding (much earlier on).

I got a cute little creamer and tea cup that is a pretty aqua color. It looks a bit like fiestaware, but I don’t think it is. I just thought it was cute. That was $10.

In the funniest moment of the day I also picked up a print and a photograph of sailboats. The print was actually DeWitt print commemorating the 25th anniversary of the magazine and it was signed by my dad (the publisher). The photo was an old photo of one of my family’s sailboats. My parents and grandmother are in it. First I thought I’d pick them up because no one else would want them. Then I thought that it would be really weird to have these things hanging in another person’s house. They combined them into one lot and for a minute there it looked like I was going to get both for $5. And then the auctioneer made a big fuss that the print was signed (um, may I point out not by the artist!) and suddenly a guy started bidding against me and the next thing you knew I was paying $60 for to pieces of art I could probably find in my parents’ basement if I looked hard enough. Oh well. 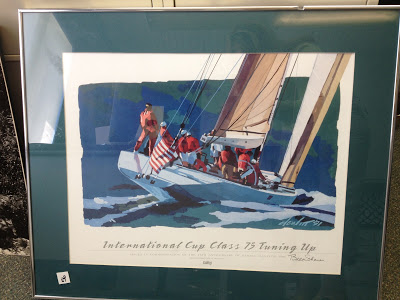 And I also got one lot of 13 glass pieces. From the back of the room they looked pretty good, but of the 13 there are only three that were really interesting: a glass pitcher that will be pretty as a vase if nothing else, matching shot glasses and a small green glass bowl. I took one dish (new with a tag still on) and brought it to work (my godmother also worked here) to use as a candy dish and the rest will get donated.

There was a ton of furniture at the auction and some of it was quite nice. There was a really cute set of four mid-century modern chairs that went for $60 or so and tons of bedroom furniture that went unsold. One totally over-the-top bedroom set surely cost a lot when it was purchased for what I’m guessing was a Tuscan-inspired McMansion. Someone got four pieces: a dresser with two mirrors, an armoire, a nightstand and a headboard for $100. Here is the dresser in all its incredible ugly-ness. 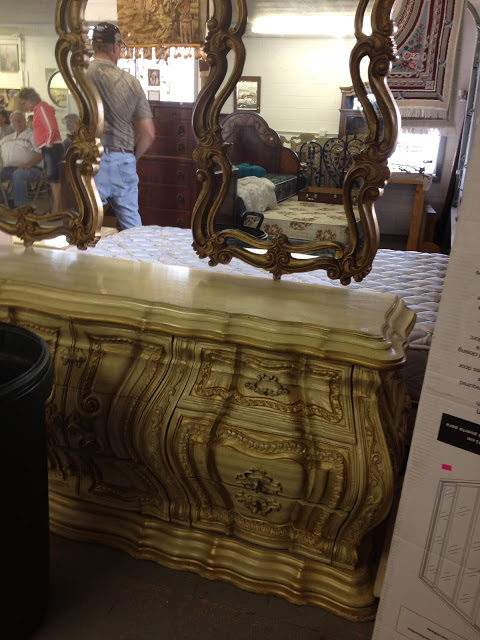 My sister-in-law picked up several things including this original artwork by a famous local artist (who happens to be a distant relative—I didn’t get the art gene). It’s not my cup of tea, but it is an original. 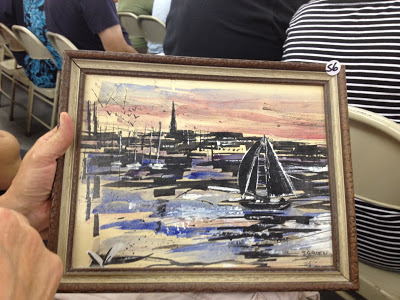 She also got this cute Kiwi bird, which unfortunately came with the ugliest eagle figurine ever. I can’t show it here because it’s bound to become a gift in our family’s white elephant exchange in the future and I wouldn’t want to ruin the great surprise for anyone. 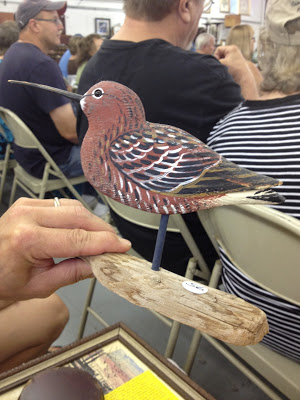 There were all sorts of other things: incredibly sports memorabilia and collectable dolls and teddy bears that went for pennies on the dollar of their value which was sad to watch (I know Mary would have much rather had the bears taken to Children’s Hospital than for people to buy them for $10), but I knew I couldn’t save it all. One sort of poignant thing that came out of it was that I realized the importance of not letting possessions rule your life. There were three 8-foot-long folding tables stacked with teddy bears in boxes. I had given some of them to her because she collected them. But in the end they just cluttered her house and probably her life and for any person coming to that auction who didn’t know her, they might have thought that’s what her life was about. I know it was so much more.