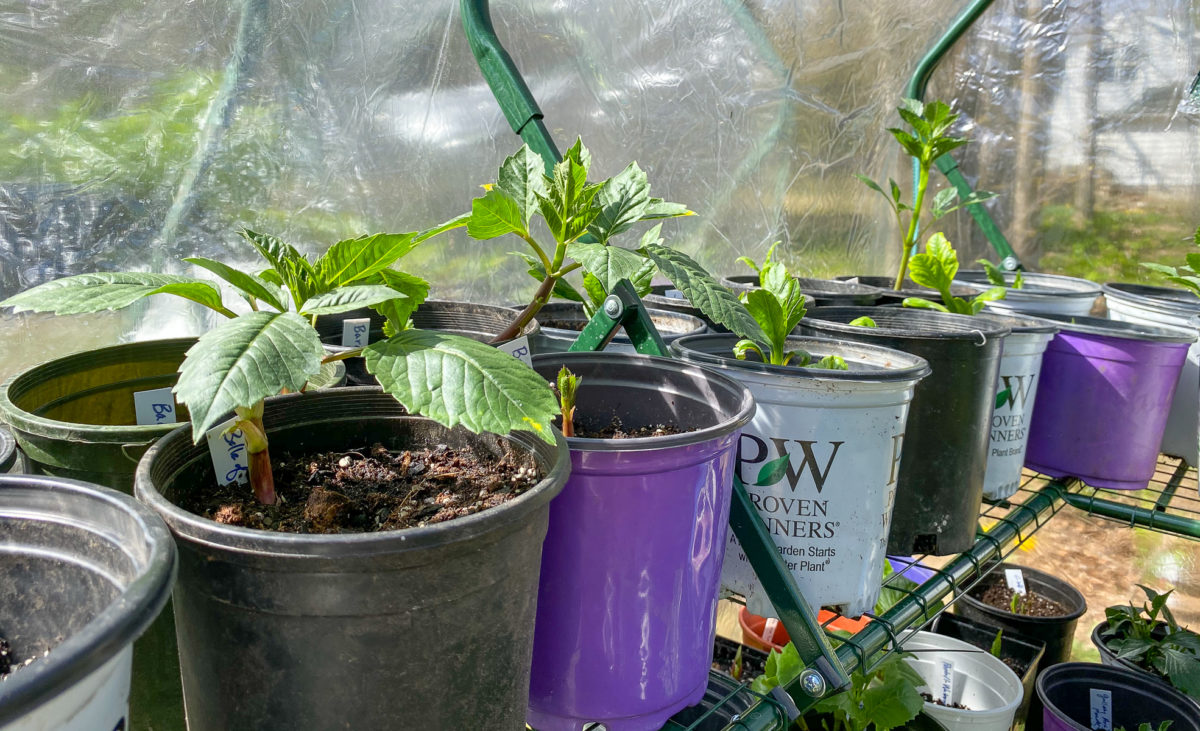 Thank you to Breck’s for partnering with me on this post. As always, all words, thoughts and dahlia obsessions are my own. Receive free shipping and up to 75% off some products at Breck’s with the code IMPATIENT20. Good through May 31, 2020.

Be careful with dahlias; they are highly addictive. Proof of that can be found in my portable greenhouse in the backyard which is nearly overflowing with potted up dahlias. I suspect I’ll have about 100 in my garden when it’s all said and done.

If you haven’t grown dahlias, rest assured, they are nice in small groups as they are by the dozens, and although I spend a lot of time fussing around with them, they are not difficult to grow.

I plant them in two ways: The “extra” way and the easy way. 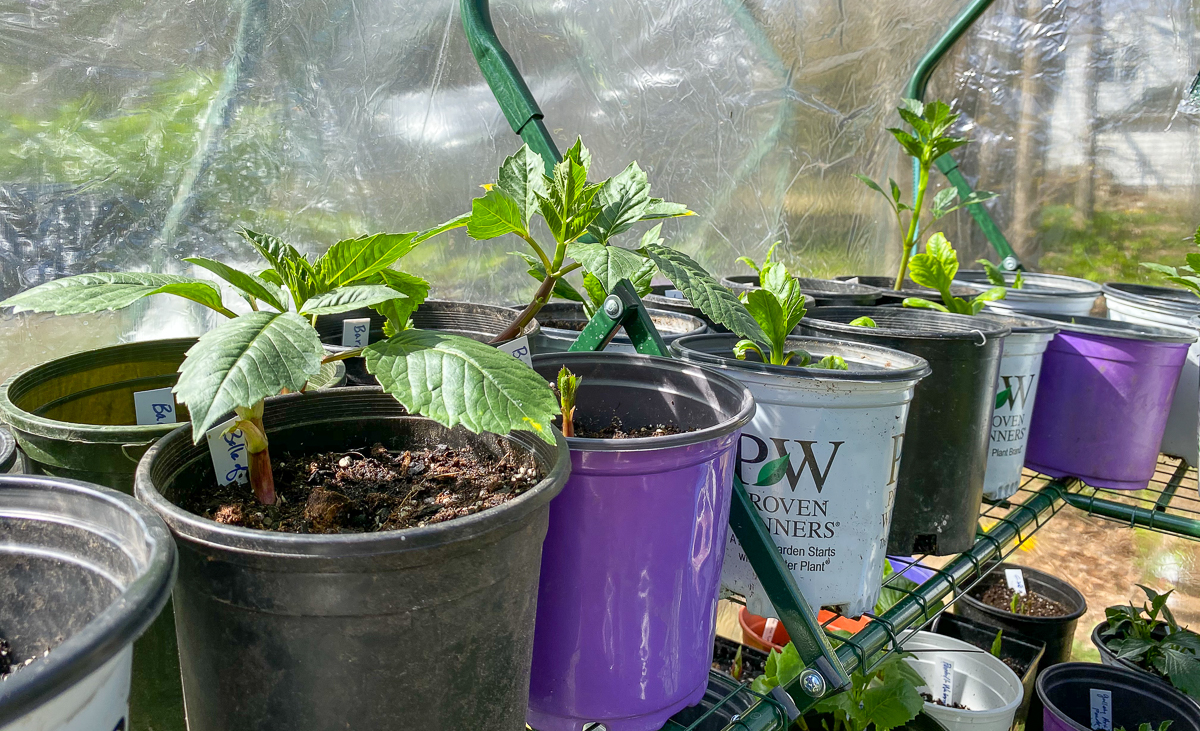 By my way of thinking, the “extra” way of dahlia planting has three advantages:

But there are disadvantages, including the added cost of potting mix and possibly plastic pots (although I reuse pots from plants e purchased), and a bit of time spent caring for them.

In this method, you pot up tubers ahead of time and get them growing before planting them in the ground. I usually start potting up tubers about a month before my last average frost date (here in zone 5 Wisconsin that translates to potting in early to mid-April based on a mid-May last frost date).

Use regular potting mix (it’s best not to use mix with fertilizer mixed in) in a gallon-size nursery pot. Very small tubers can go in smaller pots. Put a few inches of potting mix in the bottom of the pot, then lay the tuber in on its side. (If it’s too big to fit that way, you can angle it slightly.) Cover the tuber with another 3 inches of soil. Just moisten the soil and then bring the pots to a warm spot. 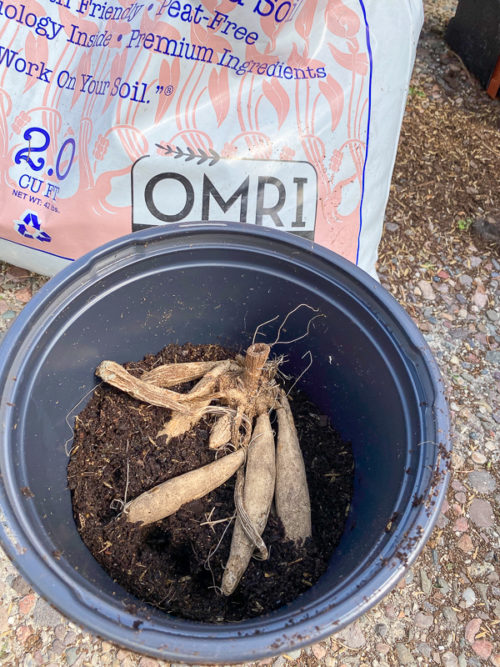 At this point all they need is warm to sprout, not light, so I just stack them up in big tubs in the house.

Tubers sprout at different times, so after a few days, start checking for shoots emerging from the soil. This is when they need light. If you move them outside at this point you’ll never have to worry about hardening then off, so it’s best to get them outside into the sun.

Dahlias are pretty easy to grow but they are fussy about temperature. You really don’t want the out in less than 50 degrees at this point, but often a protected spot with bright sun will be warmer so you can move them there. Bring them in at night if need be. Or you can use a popup greenhouse like I do. Whatever you do, don’t skimp on the light.

At this point you also want to start regular watering. They don’t need to be drenched, just not dry.

It’s safe to plant them in the garden (or their final container) when the soil temperature is 60 degrees. You can use this method at any time, and you may want to, especially if you want to keep a close eye on a tuber, regardless of how close you are to the safe time to plant out. However, the closer you are to the safe planting-out date, the less advantage you’ll realize as far as early blooms by using this method.

If that all sounded like a lot, the good news is that there’s a much easier way. You can plant your tubers directly in the ground when it’s time and skip all that fussing. You’ll have to mark them so you remember where you planted them and they’ll bloom slightly later than those you started earlier, but they’ll still grow beautifully.

You want to plant them in full or at least part sun about three inches deep by laying the tuber on its side. 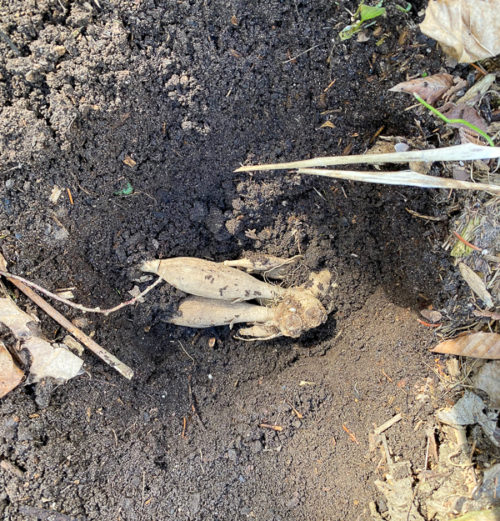 Dig a hole about 4 inches deep, and cover over, then water. It’s as simple as that!

Regardless of how you plant, there are a few tips that will help you grow beautiful dahlias. 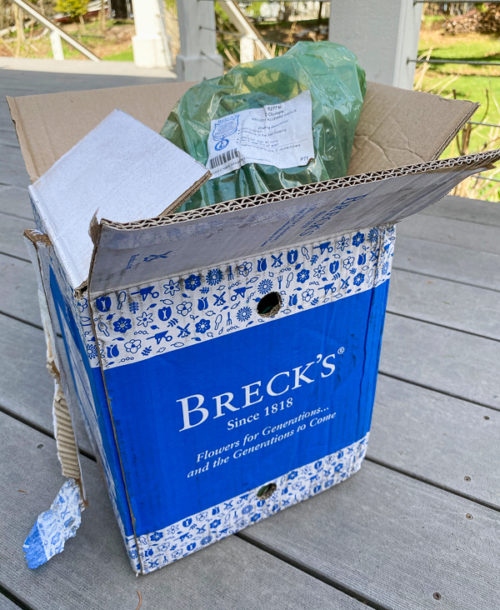 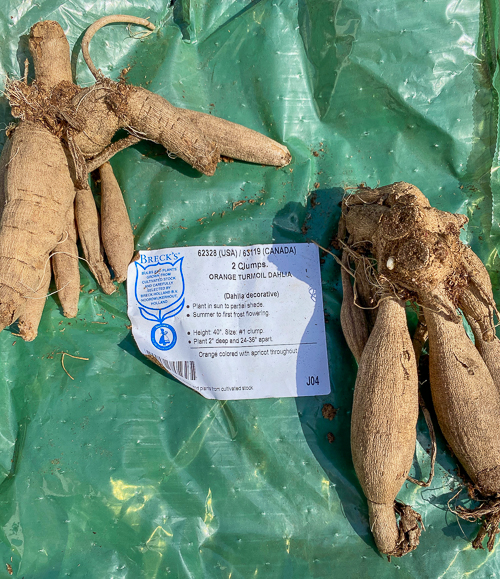 Dahlias are sometimes a single tuber or a cluster of tubers. If they come in a cluster like these, leave them together and plant them as one. 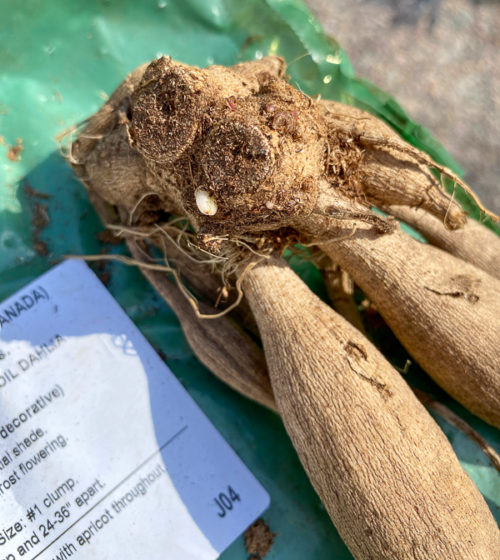 Dahlias will sprout from eyes on the neck of the tuber. Sometimes they will be visible, like the white nodule on this tuber.

If some of that sounds familiar to you, that’s for good reason. A lot of the care that dahlias appreciated is the same as that for tomatoes. In fact, if you treat your dahlias like you treat your tomatoes, odds are you’ll be in good shape.

So how do choose dahlia varieties? Since most varieties require the same care, it comes down to your personal preferences, although the one thing you should pay close attention to is the height. Obviously, the taller the dahlia, the more extensive and important the staking needs to be.

Here are some of the varieties I’ll be growing this year, almost all of which are new to me: 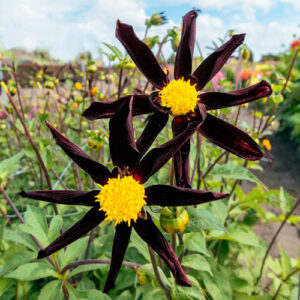 I’m very excited about this unusual variety with skinny, almost black petals. Dark dahlias are such an amazing contrast in the garden and in a vase. And since it only grows to 26 to 30 inches tall this is one variety you might be able to skip staking if you plant it in a not-too-windy area. 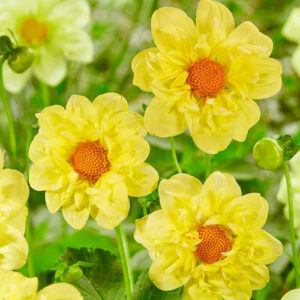 This is such a happy flower and you’ll also make the pollinators in your garden happy too. Bees and butterflies go nuts for these single-type dahlias. This is another short one, making it great for the front of the garden where you can sit nearby and watch the pollinator action. 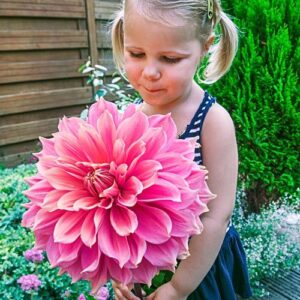 This is probably what most people think of when they picture a dahlia. It’s huge, fluffy and a gorgeous shade of pink. One flower will make a bouquet. 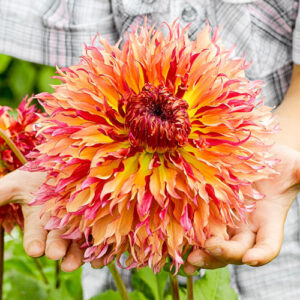 This flower looks like a fire: reds, pinks, yellows and oranges with deeply cut petals that make it look like the best kind of crazy pom pons. 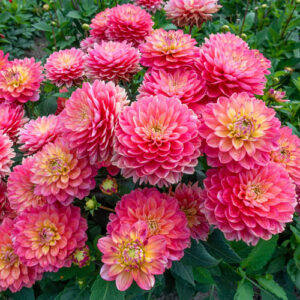 This pinky bicolor is full of flowers and, at 24 inches tall, perfect for use in containers. Just stunning color on this one. 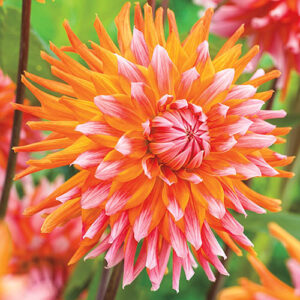 This semi-cactus variety has such amazing texture and is so unusual looking. It would be amazing in a bouquet of hot-colored flowers.

Don’t let growing dahlias intimidate you: Those big, bold flowers are baked into that little potato-looking tuber you get in the mail. All you need to do is give them the right conditions, no matter which way you go about it.

Remember, you can use the code IMPATIENT20 for up to 75% off and free shipping at Breck’s.

Breck's dahlias flowers tubers
by Erin @ The Impatient Gardener
17 Comments
previous post: How (and where) to buy plants online
next post: All the plants for the new naturalistic garden